Posted/Updated on July 07, 2010
by Srinivasa Rao M
The city of Mussoorie is located at a distance of about 34 kms. from Dehradun, in the Dehradun district, in Uttarakhand. It is a beautiful hill station that is located in the Himalayan ranges, and is also famously known as the Queen of the Hills. There is another town just adjacent to Mussoorie, known as Landour, and it is considered a part of the 'Greater Mussoorie'. 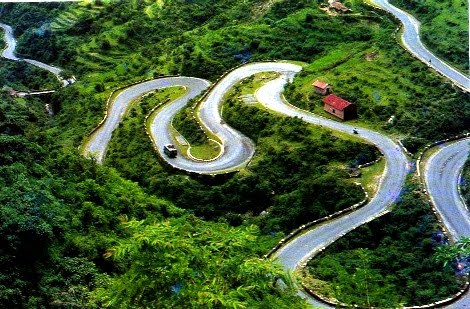 The town of Mussoorie is located at an altitude of about 2,000 metres or 6,600 feet above sea level. Surrounded by green hills and beautiful flora and fauna, it presents a wonderful and enchanting view of the whole valley. Mussoorie is surrounded by snow capped mountains to the north-east and the Doon valley and the Shivalik ranges in the south. It was once said to be a fairyland for the visiting tourists.

Mussoorie is very famous not only for the wonderful landscapes that surround it but also because of its social life. It provides all kinds of entertainment and facilities for every domestic and foreign tourist. It is very easily accessible as well. It is connected to all the major cities through road. There are many famous tourist spots in and around Mussoorie as well; some of which are - Dhanaulti, Kempty Falls, Gun Hill, Nagtibba, etc.

Mussoorie sightseeing includes many places located throughout the town of Mussoorie. The main tourist attractions of Mussoorie include the following.

This is a newly developed picnic spot that was built by the City Board and Mussoorie Dehradun Development Authority. The view during the night is absolutely marvelous. 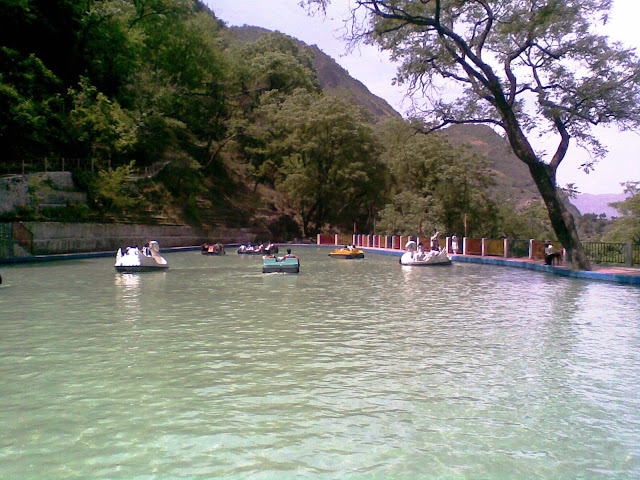 Lal Tibba: Lal Tibba is the highest point in the city of Mussoorie. It is located in the Landour area which is the oldest inhabited place in the whole of Mussoorie. 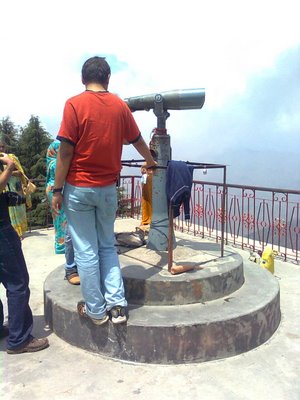 The Mall & Camel's Back Point: The Rickhaw ride down the Mall road and around the wooded road of Camel's Back is a thing to remember. It provides some of the most beautiful view of the whole valley and the Himalayan ranges. One can see youngsters walking down the mall road while eating roasted peanuts which are a favorite here. These peanuts are generally bought from the roadside vendors who keep them around little pots, known as Gharras. 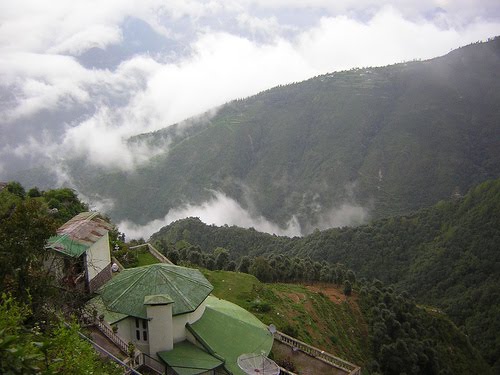 Tibetan Temple: The Tibetan temple is located in the Happy Valley area of Mussoorie. It is located just a kilometre from the Lal Bahadur Shastri National Academy of Administration, the premier training Institute for the Civil Servants. The Tibetan temple presents some beautiful insights into the rich Tibetan cultural heritage and tradition. This temple attracts tourists all round the year. 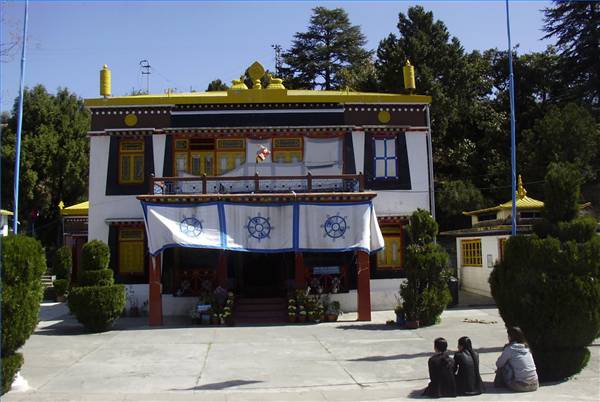 Cloud’s End: A Major of the British Army constructed a building back in the year 1838. This beautiful building was later converted into a hotel and was named 'Cloud End'. It got its name because it somehow appears that the beautiful clouds surrounding the city of Mussoorie ends after reaching here.

Cloud’s End provides a breathtaking view of the whole Doon Valley. It is situated about 8 kms. west of Mussoorie. Due to its location, it is one of the most popular destinations of the Honeymooners and foreign tourists alike. It is a very good place to take a break from the hustle bustle of the regular city crowd. 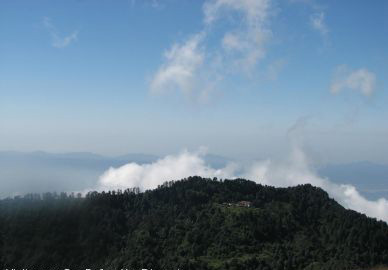 Charlieveli Hotel: The Charlieveli Hotel was the first hotel to be constructed in Mussoorie. It is a very famous hotel, both in India and abroad. It was one of the hotels which was under Queen Mary, who later became Queen of Britain.

Bhadraj Temple: Dedicated to Lord Bal Bhadra, brother of Lord Krishna, the Bhadraj Temple is situated about 15 kms. from Mussoorie. It is an ideal place for trekking via the Park Troll, Cloud's End and Dudhi. It offers an enchanting view of the whole Doon Valley, the Chakrata ranges and the Jaunsar Bhabar area.

Places to see Near Mussoorie

Haridwar: Haridwar is situated not too far from Mussoorie and it is the gateway to the four pilgrimages in the state of Uttarakhand. It is located at the foothills of the Shivalik ranges.

Rishikesh: Another very popular pilgrimage destination for the Hindus, Rishikesh is located close to Haridwar. It is also known as the Tapo Bhumi or the place for meditation of the Gods. This is also the place where the Ganges leaves the mountains and joins the plains.

Kempty Falls: Towards the western side, a little outside the city of Mussoorie, is the Kempty Falls. It is about a 15 km. drive from Mussoorie. It can also be reached by bus; regular bus service is available to and fro Kempty Falls.

It is a beautiful place, where the water stream rushes down through boulders and rocks to reach down. The journey down towards the Kempty Falls is a 20 minute stroll, while the way up is a 30 minute walk. There are regular rope-way services also available for the visitors who prefer a more comfortable and relaxed way of visiting the Kempty Falls. Apart from this, there are many snack bars here, for the tourists.

Gun Hill: A very enjoyable way to spend a day is to take the ropeway ride from the Mall to the Gun Hill. Around its flat top are many snack stalls and many photographers who wait to click some snaps of the visitors visiting the place. From the top of Gun Hill, one can have an all round view of the city of Mussoorie, Dehradun, the snow capped mountains of the Himalayas and even the small town of Landour.

Dhanaulti: After passing the clock tower, there is a road which leads to the green meadows and the beautiful, quiet place called Dhanaulti. Located about 24 kms. from Mussoorie, it is a place which provides some enthralling view of the whole Doon valley. It is also a place where the visitors can spend a weekend away from the relative hustle-bustle of the city of Mussoorie. There is a forest bungalow and a tourist bungalow for overnight stay.

Musssorie is located at an altitude of 2,005 metres above sea level. The summers at Mussoorie are pleasant and warm in the morning and cool during the evenings. The temperature ranges between 15 and 25 degrees Celsius during the summers. The winters here are quite chilly with the temperatures easily going below the zero degree Celsius mark. Snowfall is a regular phenomenon during the winter season.

The monsoons in Mussoorie can be quite heavy at times, resulting in landslides, etc. The monsoon season lasts from July to September.

The main places to visit if one wants to shop in Mussoorie are Gandhi Chowk, the Mall, Kulri Bazaar and Landour Bazaar. There are certain items which are famous in Mussoorie, like the wooden decorative and various kinds of gift items. There are many kinds of brass statues and ceramic items available here as well.

Not only these, if one is looking for branded items, there are many prominent showrooms located in the Mall. Here, one can find whatever item they are looking for; be it wooden items, brass structures, clothes, electronic items, Tibetan prayer wheels, beautiful and exquisitely designed vases or anything else.

If one is interested in hand crafted items, those are also available in Mussoorie. For example, the hand carved Oakwood walking stick is very popular among tourists in the area. The tourists can also get their pictures clicked wearing traditional Garhwali dress.

There are more expensive items, like the pure Ladakhi Shawls that are available in the markets at Mussoorie as well. These might be costly but are very beautiful. Then, there are the antique Jamawar Shawls, which are very expensive but are sure worth having a look at, if not worth purchasing.

For wooden carved boxes, brass statues of Hindu deities and Buddha's statue, etc., one can visit the Nirankari Cottage Industries, located at the Library end of the Mall. It is very famous for such items and is frequented by many visitors. Tibetan prayer wheels, ceramic Chinese vases and hand carved wooden walking sticks made from Oakwood are also available here.

How to Reach Mussoorie

Mussoorie, also known as the Queen of the Hills is a beautiful hill station situated not far away from Dehradun, the capital city of Uttarakhand. There are many ways in which one can reach Mussoorie. Read on to find out how to reach Mussoorie.

By Rail: The nearest railway station is in Dehradun, 34 kms. from Mussoorie. It is the terminus of the Northern Railway and is connected to all the major cities like New Delhi, Mumbai, Howrah, Lucknow, Varanasi, Amritsar, Saharanpur, Haridwar, Rishikesh, Allahabad, Ujjain, Indore, Kathgodam, Okha, etc.