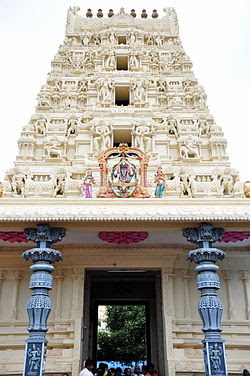 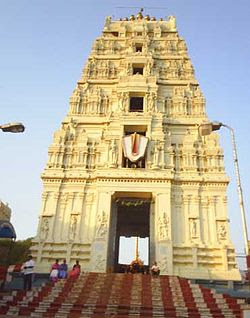 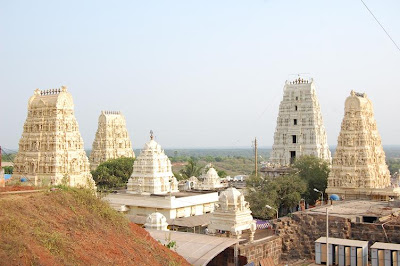 History of Dwaraka tirumala Temple
Dwaraka Tirumala is a famous temple from the ancient times. According to some Puranas, the temple is popular even in Kruta yuga and is still attracting the devotees. According to Brahma Purana, Aja Maharaja, the Grand father of Lord Sri Rama also worshiped Lord Venkateswara for his marriage. On his way to the ‘Swayamvaram’ of Indumati, he passed by the temple. He did not offer prayers in the temple. The bride Indumati garlanded him, but he had to face a battle with the kings who came to the Swayamvaram. He realized that the battle was thrust on him for ignoring the temple on the way. After realizing this, Aja Maharaja prayed to the Lord Venkateswara. Suddenly the kings stopped the battle. It is a great wonder to see two main idols under one Vimana Sikharam. One idol is a full and complete statue. The other is a half statue of the upper portion of the form of the Lord. The upper potion of the form is a self-manifested idol located by Sage "Dwaraka". The saints of the yore felt the prayers to the Lord are not complete without worshipping His holy feet. So, the saints joined together and installed a full statue behind the self-manifested idol, to worship the feet of the Lord according to Vaikhanasa Agamam. It is believed that the prayers to the smaller statue of the Lord will lead to Moksha, and the big form stands for Dharma, Artha and Kama. The Tiru kalyanotsavam is celebrated twice a year. One for the self manifested idol in the month of “Vaisakha” and the other for the installed idol in the month of “Aswayuja”.

MAGNIFICIENCE OF THE SANCTUM SANCTORUM: On entering the sanctum sanctorum, one feels a most inspiring and enchanting experience. The presiding mythological deity Lord Venkateswara is visible upto the Bust size and the lower portion is imagined to be in the earth. The holy feet are said to be offered to Bali Chakravarthi in “Patala” for his daily worship. The full size idol of Lord Sri Venkateswara standing at the back of the main idol is said to have been installed by the great social reformer Srimad Ramanuja of the 11 th century. The idols of Padmavathi and Nanchari are installed in the Arthamandapa facing east. This is a full equipped shrine to be a Divyasthala.

COMBINATION OF SIVA AND VISHNU ON ADISESHA: The most peculiar aspect here is that the hill appearing to be a serpant in form, even to the naked eye, confirms the mythological version that Anantha, the serpant king has taken up this terrestial form of serpant hill and is carrying God Mallikarjuna on the hood and Lord Venkateswara on the tail, thus creating a happy and harmonious compromise of Vaishnavism and Saivism at a single place.

RENOVATION AND ORIGIN OF THE PRESENT STRUCTURE: The magnificent monuments like, Vimana, Mantapa, Gopura, Prakara etc., stand to the credit of Dharma Appa Raoa recent ruler (1762 – 1827) and the golden ornaments and silver vahanas stand to the credit of the generous queen Rani Chinnamma Rao of Mylavaram, Krishna Dist. (1877 – 1902). These things immortalize the glory of the shrine. The main temple is a masterpiece of South Indian Architecture with its five-storied main Rajagopuram facing the south and three other gopurams on the other three sides. The Vimana is in the Nagara style and old Mukhamantapa is extended to a great extent to suit the present day needs. There are several temples of Alwars attached to the Prakara on all sides. The whole spacious compound has been paved with stone and flower trees are grown in an order as if to feast the eye of the pilgrims.

The following Major Festivals are being performed in the temple:
• Giripradakshina (January)
• Swamy Vari Vysakha Kalyanam and
Radhotsavam(Car festival) (April-May)

The Devasthanam is maintaining Annadanam scheme since 1984 and subsequently this scheme has been converted into Trust in the name of Sri Venkateswara Swamy Vari Saswatha Nitya Annadanam Trust. All the donations received from the donors are being deposited and the interest derived thereon is being spent towards Annaprasadam. Exemption U/s 80 G of I.T. Act covered for this Scheme.

Accommodation:-
Cottages, Choultries, Rooms, Dormitory halls, Cloak room facilities are available in this Devasthanam for the stay of the piligrim public.
The following are the details of Room Tariff.

The following temples which are situated within a radius of 35 km (22 mi) from Dwaraka Tirumala.

How to Reach Dwaraka Tirumala


"Dwaraka Tirumala" is an ancient holy place and a popular pilgrim center in Andhra Pradesh of South India. It is popular as chinna Tirupathi. Dwaraka Tirumala is nearer to Eluru, the head quarters of West Godavari District, which is 42 KM away from Eluru.

By Rail:Though there is a Railway station at Bhimadole, very few trains (mostly local) stop. This railway station is on the main railway line of Vijayawada to Visakhapatnam.One can alight at Eluru (if you are coming from Vijayawada) or at Rajahmundry/TadepalliGudem (if you are coming from Visakhapatnam) and catch a local train to Bhimadole and from Bhimadole,Catch a bus.at,tirumala exp stops at bhimadolu every one must watch this temple.at bhimadole the transportation is well developed across the andhra and other states like orissa and bangalore,kolkata,....we can reach badrachalam from here...the cottages of temple and aptdc are established.the help line center at bhimadole junction bus stand will help you to reach the temple.