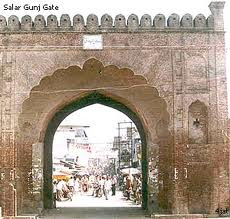 Panipat is the first historic site of importance after leaving Delhi, and is a battlefield town near the banks of the river Yamuna. This town lies on the higher ground made up of the debris of earlier settlements. It overlooks the old river course. Three great battles were fought here, and no evidence remains here to suggest their importance for India and for the establishment of the Mughal Empire.
History of Panipat
On 21 April 1526, the first battle was fought in Panipat between Babur and Ibrahim Lodi, the Sultan of Delhi. Babur had entered India with about 12,000 men. By the time he reached Panipat his forces had gone to 25,000 men. Ibrahim’s army had 100,000 men and 1000 elephants. Babur dug himself in using a formation, which Babur claimed to have adapted from Turkish practice. As many as 700 carts were gathered together and strung together with ropes of rawhide, thus creating a barricade similar to those used in North America. From behind this, the matchlock men would fire on the advancing enemy. It took several days before Ibrahim could be provoked into attacking but when he did his army came to a grinding halt before the fusillade of musket fire. In the meantime, Babur’s cavalry attacked on both flanks in a pincer movement, raining arrows on the Indian army caught on three sides and too cumbersome to about turn and retreat. When the battle ceased, about 20,000 of the Sultan’s army were dead, including their leader. The second battle of Panipat took place on 5 Nov, 1556 between Akbar, Biaram Khan and Hemu, the general of the Afghan Sher Shah. The battle was going badly for Akbar until Hemu was hit in the eye by an arrow, and although it did not kill him outright, it made him unconscious. The sight of the tiny Hemu slumped in the howdah of his elephant caused his troops to flee. Hemu was brought unconscious before Akbar and Bairam Khan and beheaded. The head was sent to Kabul and the body was hung on a gibbet at Delhi. There was a mass slaughter of those unfortunate enough to have been caught, and in the gruesome tradition of Genghis Khan and Timur a victory pillar was built and their heads plastered in. The third battle took place on 13 January, 1761 between the Marathas and Afghans. The remnants of the once great Mughal Empire was threatened from the west by the Rajputs and from the north-west by Afghans, who sacked Delhi in 1756-57. The distracted Mughal minister called the Marathas and according to Percival Spear, the triangular power struggle between the Mughals, Marathas and Afghans became a duel between the Marathas and the Afghan. The Maratha army includes 15000 infantry, 55,000 cavalry and 200 guns. These were supported by 200,000 Pindaris and camp followers. The Afghan army comprised of 38000 infantry, 42,000 cavalry and 70 guns, besides numerous irregulars. The Marathas lost the battle and their soldiers fled. However, the Afghan leader Ahmad Shah Durrani was unable to take advantage of his victory as his followers were mutinied for the two years arrears of pay he owed them. Thus, the former Mughal empire was denied to both the Afghans and Marathas, leaving North India in a political vacuum which adventurers tried to fill during the next 40 years.
Tourist Attractions in Panipat
The main old building in Panipat is a shrine of the Muslim saint Abu Ali Kalandhar. One of the story about him reminds of the Old Testament story of Moses in Egypt, as he was said to have banished all flies from Panipat. The people complained about it and so, he ordered 1000 times to come back. Panipat is not the only small town in India where this story might seen to have the ring of truth. The other tourist attraction in Panipat are the battle filelds where the three famous battles of Panipat was fought.
Ibrahim Lodi’s Tomb: In the first battle of Panipat, Babur was victorious against Ibrahim Lodi who lies buried in a tomb at Panipat. This tomb is very simple and is simply a rectangular block on a high platform that has some steps constructed from lakhori bricks. In 1866, the British renovated this tomb and added an inscription that mentioned Ibrahim Lodi’s defeat by Babur. 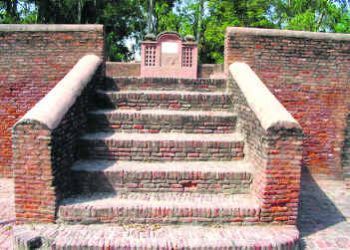 Kabuli Shah Mosque: After Babur was victorious against Ibrahim Lodi, he constructed a mosque approximately 2 kilometers from Panipat and named it after his wife Kabuli Begum. After six years, Humayun was victorious against Salim Shah close to Panipat after which he constructed a platform surrounding the mosque and named it as ‘Chabutara Fateh Mubarak.’ As he was the ruler nobody objected to the name and the name continues even today. This mosque currently has chambers on either side and along the parapet there is an inscription in Persian. 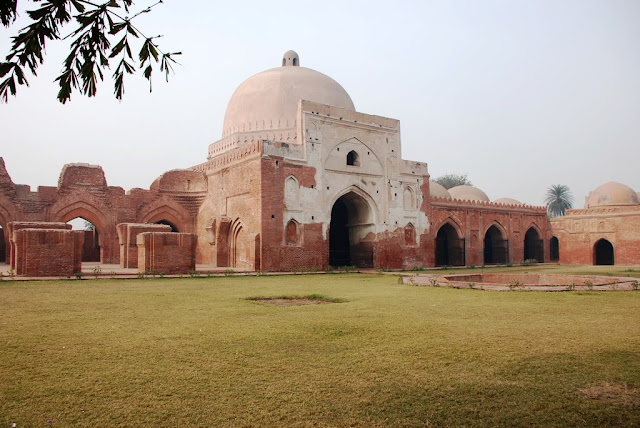 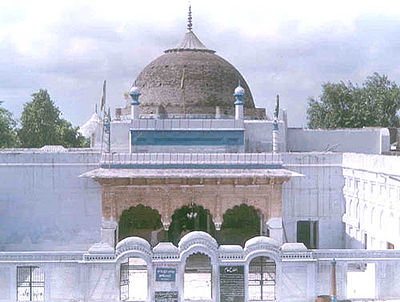 Excursions from Panipat
Karnal: Karnal is an ancient town, situated about 34 kms from Panipat. According to the legend, it was founded by one of the leaders of the Kaurvas in the great battle of Mahabharata. It was seized by the Raja of Jind in 1763 and taken from him by George Thomas in 1797. A British cantonment was established in 1811 but was abandoned in 1841 due to the unhealthiness of the site, caused by the West Jumna canal interfering with natural drainage and promoting malaria fever. The canal was re-aligned in 1875.
Kaithal: Kaithal is situated about 63 kms from Panipat. This was an important town during Akbar's reign and is located by the Bidkiar lake, a picturesque man-made lake. In 1767, it passed to the Sikh leader Bhai Desu Singh whose descendants, the Bhais of Khaithal, achieved some prominence on the Indian side of the Sutlej before the British acquired the territory in 1843. The old ruined fort of the Bhais overlooks the lake.
Surajkund: Surajkund is a village that is situated just 20 km from Delhi’s city centre, between the villages of Baharpur and Lakkarpur in Haryana. The village takes its name from a splendid water tank that is believed to have been constructed by the Rajput king Suraj Pal in the 11th century. The village people make their living by grazing livestock and stone quarrying. The main attraction of Surajkund is the annual Surajkund Crafts Mela which is held between the 1st and 15th February in the village complex. This fortnight – long gathering of crafts persons from all over India has become one of the most prominent cultural fairs in the tourism calendar. This fair is organized on the periphery of the water tank and brings together potters, weavers, embroiderers, wood carvers, metal workers, stonesmiths, painters and other craftsmen, across the county. Various folk dancers, musicians, acrobats and magicians also give their performances in the fair.
Climate in Panipat
Panipat has hot and humid climate. In summer, the temperature goes up to 44 degree celcius. In winter the temperature is around 4 degree celcius, especially in end December and beginning January.
When to go
Best Time to Visit Panipat is November To March.
How to reach Panipat
By Air: The nearest airport to Panipat is at New Delhi. Delhi International Airport or Indira Gandhi International Airport has Air India, Air Sahara, American Airlines, Asian Airlines, British Airways, Biman Bangladesh Airlines, Emirates, Indian Airlines, Kuwait Airways and many more plying across the world.
By Bus: Panipat Bus station is about 92km from north of New Delhi with local bus services to all major places in Panipat District and inter-district services to all districts of Haryana. Buses carry out from Panipat to Ambala, Jind, Karnal and Sonipat. Inter-state services are available to all major cities in Uttar Pradesh and Delhi.
By Train: Panipat Junction Railway Station is on the Kurukshetra-New Delhi rail route. The main rail links include Jhelum Express, Kalka-New Delhi Shatabdi Express, New Delhi-Chandigarh Jan Shatabdi Express, Paschim Express and New Delhi-Amritsar Express.
Next Post Previous Post
Haryana