Location
Tour to Bhubaneswar The capital of the East Indian state of Orissa, Bhubaneswar extends from latitude 20°15' North to longitude 85°52' East. An important city of the temple triangle of Orissa, Bhubaneshwar has direct air, road, and rail connection with the other major cities of India.
History
Bhubaneswar derives its name from the Sanskrit word Tribhuvaneswara, which stands for Lord Shiva. The area around Bhubaneswar constituted the famed kingdom of Kalinga, which was conquered after a bloody battle by Ashoka, the great Mauryan emperor. Appalled at the carnage, Ashoka renounced violence and embraced Buddhism. Around the 1st century BC, under the rule of Kharvela, Orissa regained its lost glory and Bhubaneswar again became the center of activities. During this period, monastery caves were constructed of which Khandgiri and Udaygiri are the most important. By the 7th century, Hinduism supplemented Jainism, and Ganga and Kesari kingdoms did a lot for the development of Orissan culture. Most of the kings who ruled Orissa constructed beautiful temples. For a better part of its history, Bhubaneswar remained under the influence of Afghans, Marathas, and the British (till 1947).
Against this multi-hued tapestry of history, and the backdrop of the soaring sandstone spires of old Bhubaneswar, a new capital has taken shape. The modern architectural designs and materials of new Bhubaneswar contrast starkly with the old city. Nevertheless, mindful of its unique status, new Bhubaneswar is a calm, progressive city, linking the old and the new most effectively.
Bhubaneswar Tourist Attractions
Bhubaneswar Tourist AttractionsWhile planning Bhubaneswar sightseeing tours, it is usually the temples that occupy the top most position. The city has a glorious history of temples, which date back to the time of the Kalinga Empire and are more than 25 centuries old. Devotees come from different parts of India as well as the world to visit these splendid temples. Apart from the temples, there are a number of other places in Bhubaneshwar that are worth watching. In the following lines, we provide you information on the places you can visit while on a tour of Bhubaneswar city of Orissa.
Bindusagar Lake: Lying to the north of the Lingaraja Temple, the Bindusagar Lake is one of the popular tourist attractions of Bhubaneswar. Infact, the lake has been gaining more and more popularity amongst the tourists as a picnic spot. 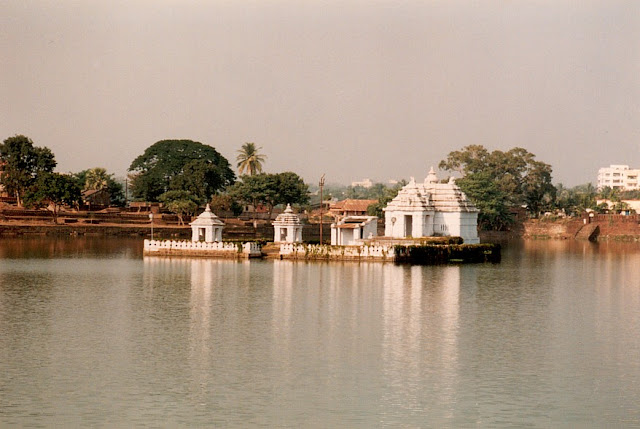 Lingaraj Temple: Lingaraj temple is one of the most popular temples of Orissa. The temple is dedicated to Lord Shiva, also known as ‘Lingaraj’. It is adorned with beautiful sculptures, which have been carved on the spire. 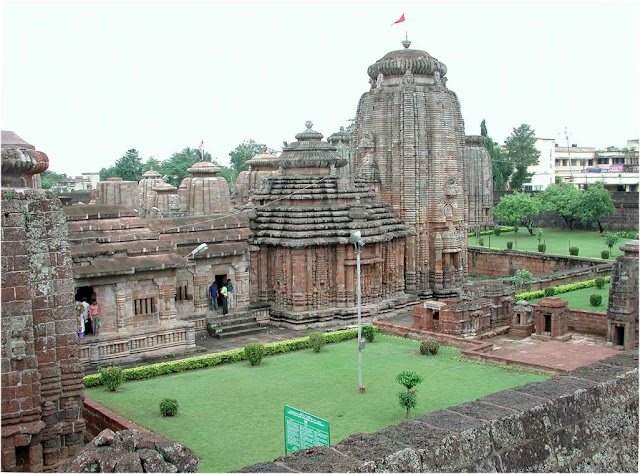 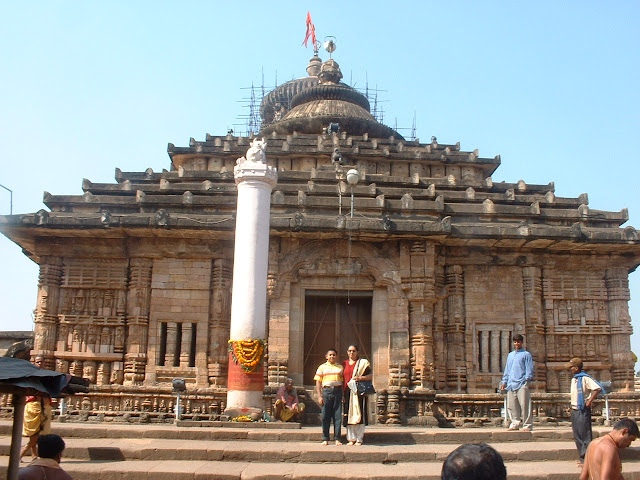 Mukteshwar Temple: Mukteshwar temple, one of the most prominent temples of Bhubaneswar, has been constructed in the style that is quite similar to the one used in the Kalinga School of Temple Architecture. 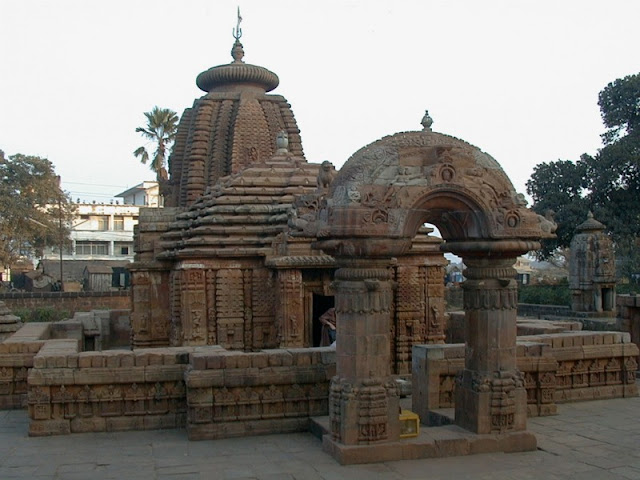 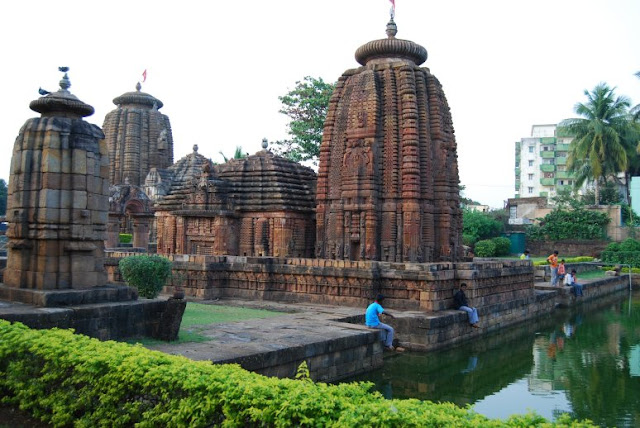 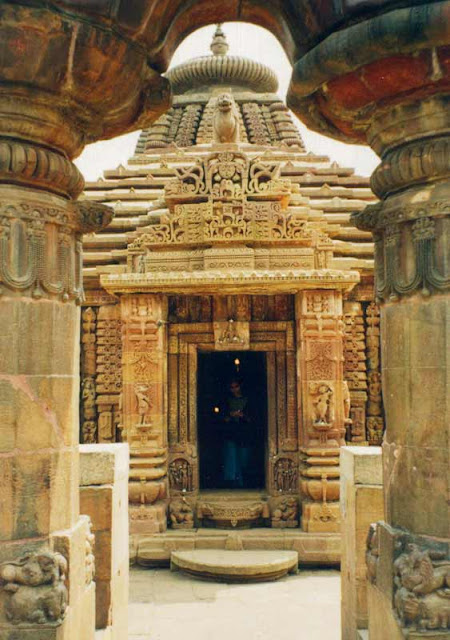 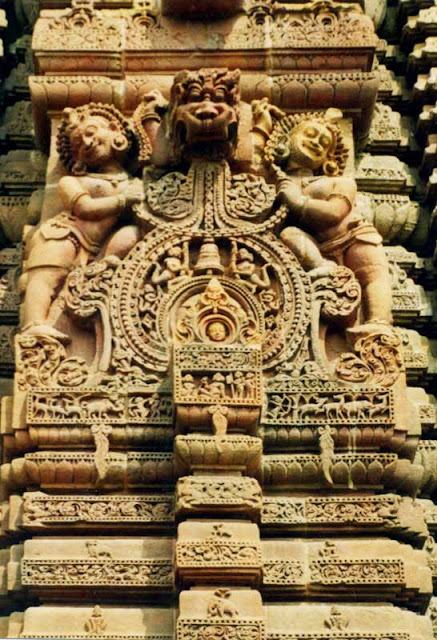 Rajarani Temple: Rajarani temple is one of the most renowned temples in Bhubaneswar, the capital city of Orissa. It is made from the wonderful red and gold sandstone, which is locally known as Rajarani and this is what gives the temple its name of ‘Raja Rani’. 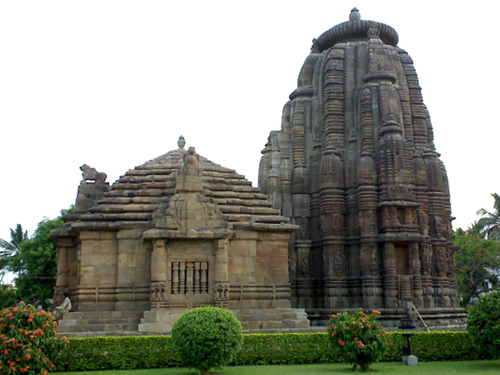 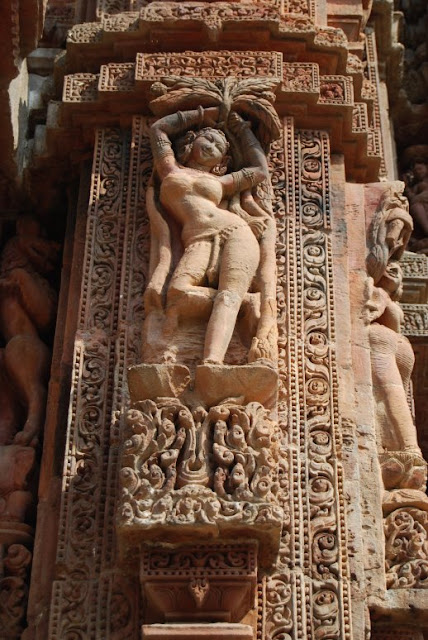 Orissa State Museum: The origin of Orissa State Museum can be traced back to the year 1932. Its foundation was laid when Professor N. C. Banerjee and Professor Ghanshyam Dash of Ravenshaw College, two famous historians, initiated the task of collecting archaeological treasures from different places. 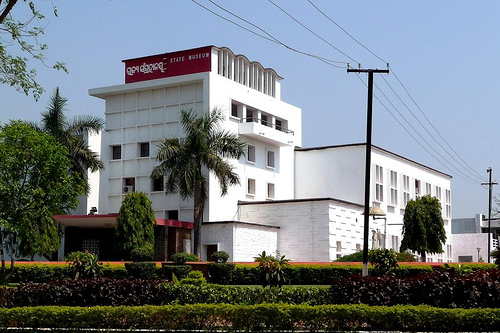 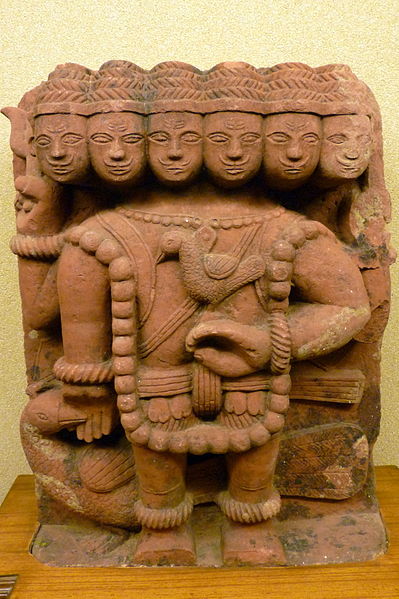 Bhubaneswar Excursions
Bhubaneswar ExcursionsBhubaneswar, the capital city of Orissa, is regarded as one of the holiest cities of the country. Infact, it is known by the name of the "Temple City of India". The major reason for this is that the city is the seat of ‘Tribhubaneswar’ or 'Lord Lingaraja'. Along with that, there are hundreds of Hindu temples in the city that attract devotees from far and wide. Bhubaneshwar is not only known for it religious places. Rather, there are numerous tourist places in and around the city where one can go and enjoy, like the Pipli village. In the following lines, we have provided information about a few popular excursions from Bhubaneswar.
Nandankanan National Park: Nandankanan National Park is a must-visit tourist attraction of Orissa. On one hand, it fulfills the criteria of being a zoological park. On the other hand, it also serves as a grand botanical garden, where one can see even the rarest species of plants. 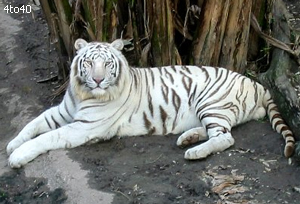 Dhauli Hill: Dhauli Hill, one of the most visited Buddhist pilgrim destinations in India, is situated in the state of Orissa. It is located in the Khurda district, at a distance of approximately 8 km from Bhubaneswar. 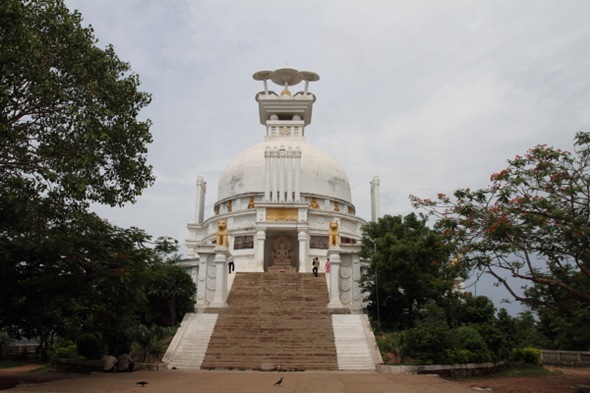 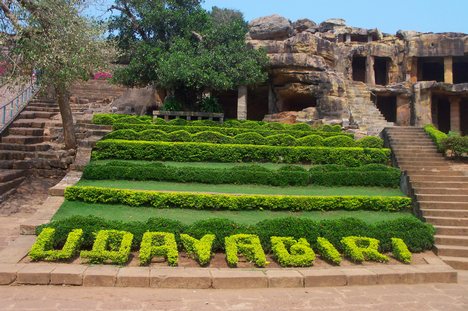 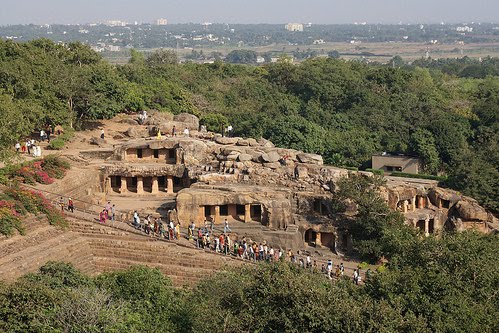 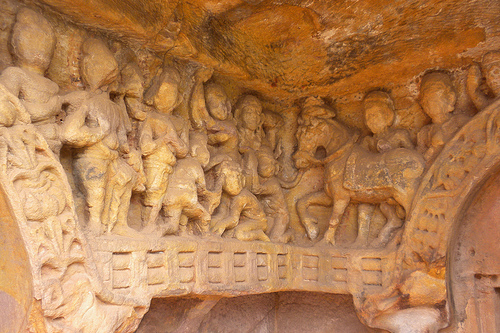 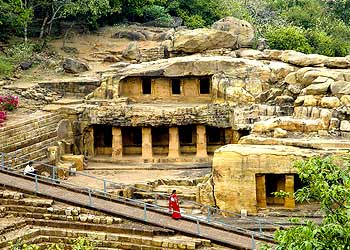 Sun Temple: Sun temple is one of the most popular tourist attractions in Konark. The credit for constructing this 13th century old shrine, dedicated to Sun God, goes to Raja Narsimhadeva of the Ganga dynasty. Konark Sun Temple has been built in the form of a gigantic chariot that has 24 wheels. 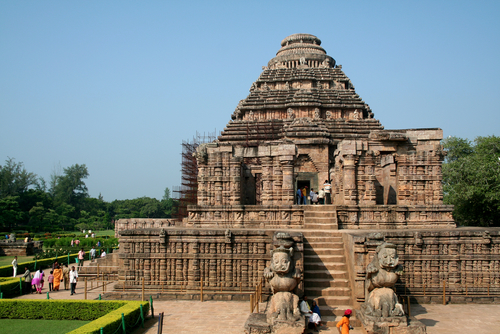 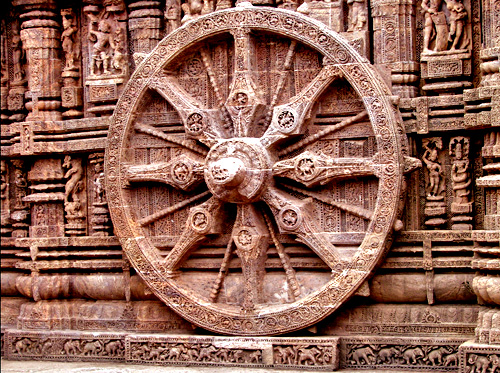 Pipli: Lying approximately 29 km from Bhubaneswar, Pipli is a small village that is famous as a centre for applique work. A visit to the village can bring you very close to the culture of Orissa. Colorful canopies, blooming gardens, bright beach umbrellas, shoulder and handbags, etc are some of the things you can shop for, when in Pipli. 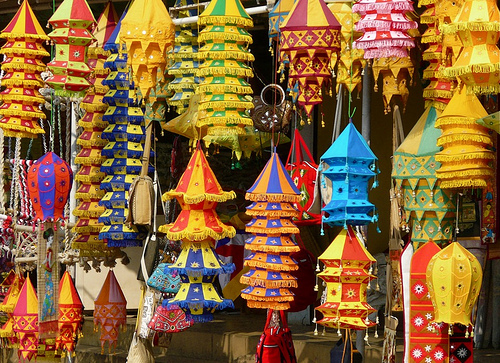 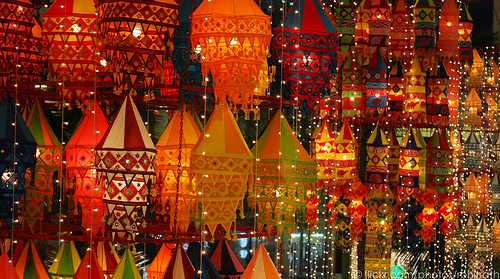 Atri Springs: Atri springs are situated at a distance of about 42 km from the city of Bhubaneswar. Hot sulphur springs; they are believed to cure people of acute skin diseases. At the same time, the vast greenery surrounding them, along with the picturesque locales, definitely makes the visit a pleasant experience. 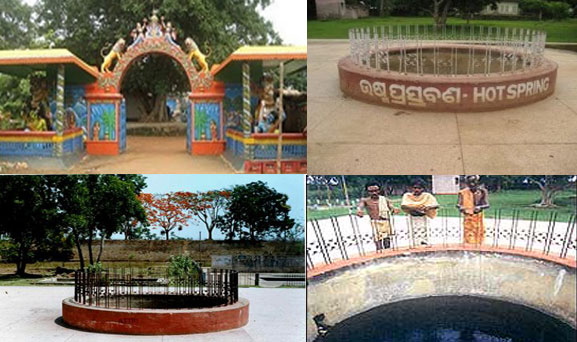 Yogini Temple (Hirapur): The city of Hirapur lies almost 15 km from Bhubaneshwar. It is known for its Hypaethral temple of sixty four Yoginis, which dates back to as far back as the 11th century. This temple is second of its kind in Orissa and fourth of its kind in India. 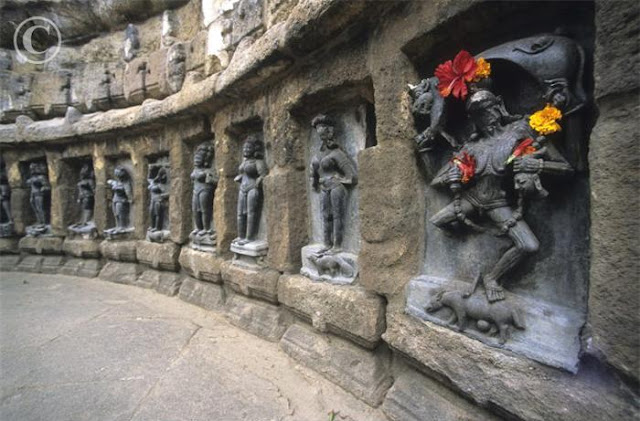 Sisupalgarh: Sisupalgarh is an old, ruined city that is situated at a distance of approximately two km from the Lingaraja Temple of Bhubaneswar. It is believed to date back to the third or fourth century BC and serves as a proof of the fact that even at that time; fortified cities existed in the area. 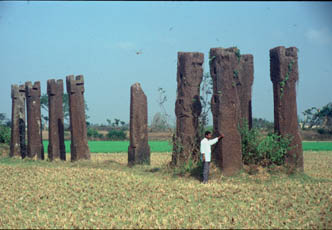 Fairs and Festivals
On the day of Ashokashtami in the month of March, the image of Lingaraja (Lord Shiva) and other deities are taken in a procession from Lingaraja Temple to the Rameshwara Temple. Hundreds of devotees participate in pulling the chariot that carries the deities. The deities remain in the Rameshwara Temple for four days.
At the end of January comes Adivasi Mela, a fair that displays the art, artifacts, tradition, culture, and music of the tribal folks of Orissa.
Other festivals of importance are Durga Puja, Janmashtami, and Kali Puja.
Facts and  Figures
Area: 65.03 sq km
Language: Oriya, Hindi, and English
Best time to visit: October to April
STD Code: 0674
Best time to Visit Bubaneswar
Situated at an altitude of 45 m above sea level, the temperatures range between 15.7°C in winter to a maximum of 30°C to 40°C in summer. Bhubaneshwar is comfortable round the year, but the best season to visit the city is during the months of October to April.
Where to Stay in Bubaneswar
Being the capital of Orissa, Bhubaneswar has a good choice of accommodation to choose from. From a leisurely laid-out resort to top-end hotels and roadside motels to middle range accommodation, everything is available in Bhubaneswar.
Bhubaneswar Shopping
Shopping in BhubaneswarBhubaneswar, the ‘Temple City of India’, is not only known for its magnificent places of worship. Rather, it is also a shopping lover’s delight. You don’t need to worry about ‘where to shop’ at all. There are innumerable shopping places in the city; of which some are run by private owners, while others are Government-owned. For those who are fond of traditional fabrics, Bhubaneshwar is just the place to shop. The city is well known for its Ikat fabrics, which are extensively used in making Saris as well as other readymade garments.
Applique work of Bhubaneswar, locally called Chandua, is in great demand these days. Other best buys include Tussar silk, Sambalpuri silk and Cotton. Apart from the fabrics, there is also a wide variety of metal ware available in the city. It mainly consists of exquisite pieces of jewelry made from fine silver and distinctive kinds of metal sculptures, known as Dhokra. Other interesting items available in Bhubaneshwar include handcrafted wooden items, like lampshades, vanity boxes, vegetable baskets, etc.
Even the stone sculptures of Gods and Goddesses made in the city are selling like hot cakes in the market. Bhubaneswar is also well known for its paintings. Some of the popular paintings are Patachitra, paintings made on palm leaf, and Ganjapas. One can easily find seashells in the coastal city of Bhubaneshwar. Available in different shapes and sizes, they are used on a number of items like lampshades, fruit baskets, purses, mirrors, jewelry boxes, trays, etc and are a favorite amongst tourists.
How to Reach Bhubaneswar
How to Reach BhubaneswarBhubaneswar, being the capital city of Orissa, is easily accessible. Traveling to the city is totally hassle-free, as it is very well connected with the almost all parts of India, by air, rail or road. Numerous flights as well as trains operate to and from Bhubaneshwar, which help the tourists in reaching there easily. Still, to ensure that your vacations are totally comfortable, we have provided information that will tell you ‘how to reach’ Bhubaneswar.
By Air: Indian Airlines operate flights on a day-to-day basis to and from Bhubaneswar. Along with that, there are a number of private airlines that connect it with the major cities of India, like Delhi, Chennai, Calcutta, Vishakhapatnam, Varanasi and Nagpur, by air.
By Rail/Train: Bhubaneshwar is very well linked with the rest of India by railways. There are various super fast trains that link the city with other major cities, like New Delhi, Chennai, Mumbai and Hyderabad.
By Road: Bhubaneswar is well connected to almost every part of the country by the national highways. Buses and taxis are easily available from Bhubaneswar for traveling within the state as well as going to the neighboring ones.
Next Post Previous Post
Odisha