Apart from being the IT hub of India (also known as India's Silicon Valley) Bangalore city has a number of tourist attractions. There are numerous gardens in this "Garden City" and historical sites too that are worth visiting.
The main historical attractions in Bangalore are :
Vidhan Soudha or the State Secretariat : It was built in 1954 and is the main attraction of this city. It is a marvel of modern architecture and is a fine amalgamation of traditional Dravidian and modern styles. Cubbon Park, the 120-hectare park located near the Vidhan Soudha, has a number of neo-classical styled government buildings. 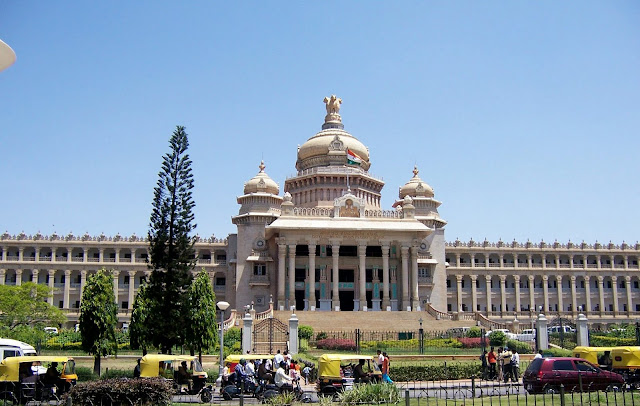 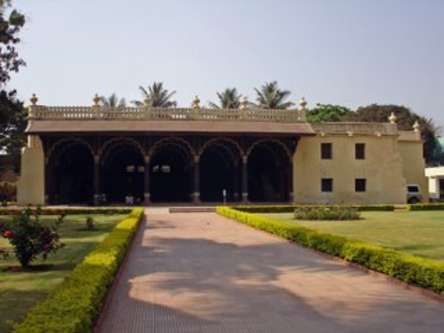 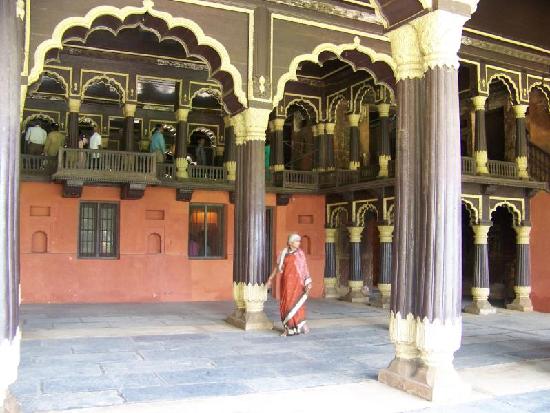 Museums :The Government Museum of Bangalore (one of India's oldest museums) and the Visvesvaraya Technological and Industrial Museum are important museums within the city. 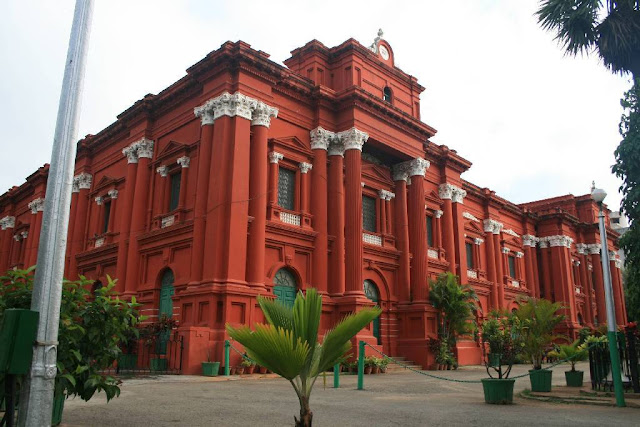 Botanical Gardens : The Lal Bagh Botanical Gardens, which holds a number of flower shows, especially during the Republic Day (26th January), is located on the southern fringes of the city. 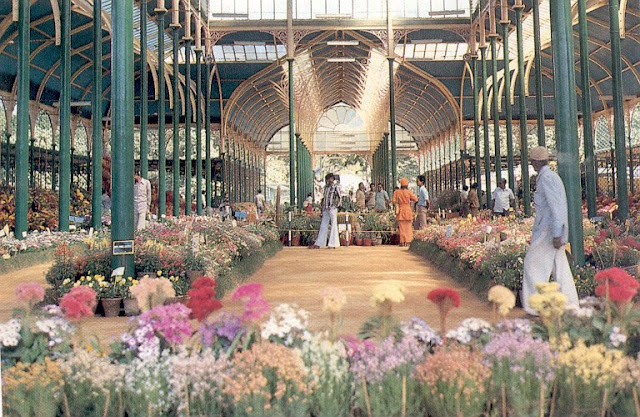 Ulsoor Lake : The Ulsoor Lake on the northeastern edge of the city is an important picnic spot. 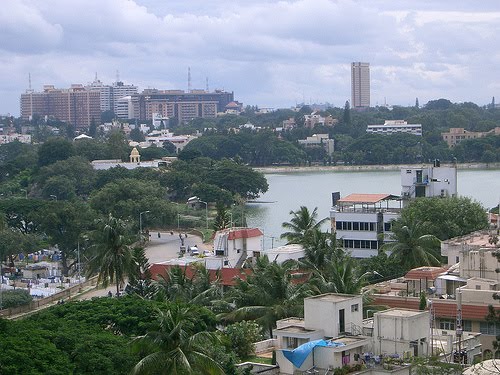 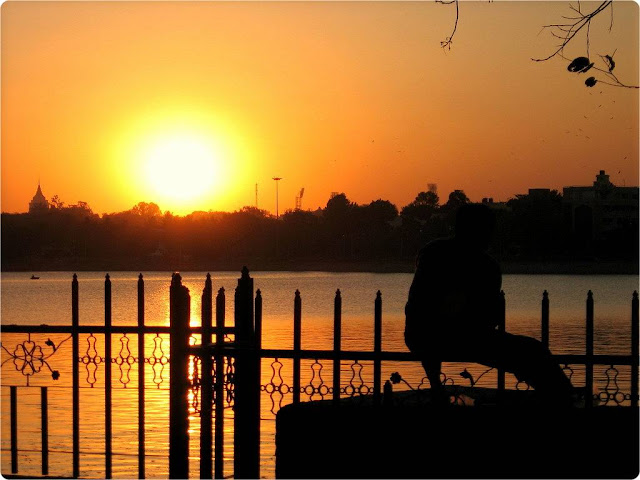 Temples : The 16th-century, Dravidian-styled temple dedicated to Nandi, the Bull is an important place of worship. The Venkataramanaswamy Temple, the Gavi Gangadhareswara cave temple, and the Someshwara Temple are other important temples of this city. 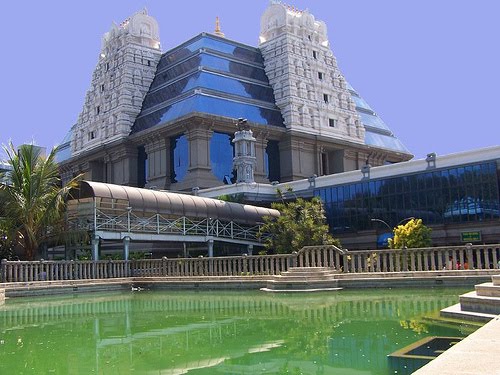 Spiritual Centers : Whitefield Ashram, the summer abode of the Shri Sathya Sai Baba, 20 km east of Bangalore, and the ISKCON (International Society for Krishna Consciousness) Temple Complex are important spiritual centers, worth paying a visit. The Bangalore Ashram of the Art of Living working under the grace of Gurudev Sri Sri Ravishankar is situated on the outskirts of this Bangalore on Kanakapura Road.
Excursions from Bangalore
There are a number of places of tourist attraction near Bangalore. These places around Bangalore make excellent weekend trips and excursions from Bangalore.
Bannerghatta National Park : Bannerghatta National Park, 21 km from the city, is an important place to visit.
Nrityagram village : Thirty kilometers from Bangalore is the Nrityagram village, housing a classical dance academy.
Nandi Hill Resort : Sixty kilometers from Bangalore is the Nandi Hill Resort, which is also famous for its temples and fort.
Devarayandurga : Devarayandurga, 70 km from Bangalore, is famous for its hilltop shrines.
Cutural Centers : Bangalore has a number of cultural centers near it, which offer to the tourist a number of traditional craft items. Ramanagaram is a silk cocoon-marketing center.
Janapada Lok (near Ramanagaram) and Channapatna (60 km southeast of Bangalore) are famous craft centers.
Doda Alada Mara : The Doda Alada Mara, a 400-year-old banyan tree lying 28 km from the city, is an idyllic place for picnics.
Mekedatu : Mekedatu, 98 km south of Bangalore, and Muthyalamaduvu, 40 km from Bangalore (also known as the Pearl Valley), are other important picnic spots.
Mysore : The historic city of Mysore is 139 km from Bangalore offers the tourist a number of monuments belonging to Hyder Ali and Tipu Sultan, the erstwhile rulers of the place

How to Reach Bangalore
Bangalore also known as India's Silicon Valley is a metro that has an international status. Bangalore is easily accessible by air, road, and rail.
By Air:There are number of daily flights to important cities like Kolkata, Mumbai, Delhi, Hyderabad, Chennai , and Ahmedabad. Booking offices of all international airlines are located in Bangalore. Many direct international flights connect Bangalore with Singapore, Muscat and Sharjah. The airport of Bangalore is situated at a distance of 13 kilometers east of the City Station.
Some of the airlines having their flights to Bangalore are:
* Kingfisher Airlines
* Go Air
* SpiceJet
* Air Deccan
* Jet Airways
By Road: Bangalore has a large bus terminus, which is near the railway station. A well developed network of roadways connects Bangalore with Hyderabad, Mysore, Mumbai, Hospet and Chennai. For accessing the sightseeing destinations of Bangalore, regular buses are operated by KSRTC. The Main bus terminal in the city is opposite City Railway Station. and neighboring states are also. The Karnataka State Road Transport Corporation (KSRTC) conducts a number of tours and excursions around the city
By Rail: Bangalore City Railway Station is the main terminal in Bangalore.It is well connected to all major Indian cities. There are number of daily express trains from Bangalore to other cities of India. Bangalore is connected to all major Indian cities by rail. Several super fast trains such as Shatabdhi, Brindavan, Lalbagh express connect Bangalore to Chennai.
Travel in Bangalore: One can get prepaid taxis and auto-rickshaws to and from the Airport. Local Bus services within Bangalore city are good. One can also take auto-rickshaws and avail of rented cars to travel within the city.
Next Post Previous Post
Karnataka