Like Rajgir, Vaishali too is relevant and important for Jainism and Buddhism. While Lord Mahavira was born at Vaishali, Lord Buddha spent significant time at Vaishali delivering sermons to people. Not only in Buddhist and Jain literature, Vaishali is mentioned in Ramayana too. The name of place is believed tobe derived from the name of king Vishala. Historically speaking, Vaishali was the first democratic republic, even before Greeks.
Vaishali was once a well established and full fledged center of trade and commerce in the Ganges plains. Being the birth place of Lord Mahavira, Vaishali is a holy place for Jains. Lord Buddha visited Vaishali several times and preached at Kolhua which is near Vaishali. Vaishali had a double storey Buddhist monastery and was a seat of higher learning.
Historical evidences reveal that Lord Buddha allowed the entry of women into Buddhist sangha at Vaishali monastery only. The Mauryan king Ashoka erected one of his lion pillars at Kolhua to commemorate the visit and sermon delivery by Lord Buddha at the place. Also, Vaishali was the place where second Buddhist council was held to organize Buddhism order after hundred years of enlightenment of Lord Buddha. To commemorate the Second Buddhist Summit, two stupas of remarkable size were erected here.
The archaeological museum at Vaishali has huge collection of items unearthed during excavation of ancient site of Vaishali. Near to the museum is a World Peace Pagoda built by the Japanese Buddhists.
Vaishali was an important center of activities even after the Mauryan period. Post- excavation findings show that during the rule of the Guptas and the Palas the city was a trade and commerce center. There is evidence that Vaishali was linked with Pataliputra by royal highway. Lauria Nandangarh, at the distance of 23 kilometers is another major tourist attraction for it houses stone pillar of the Maurya king Ashok.
Vaishali Museum: Vaishali is known for its rich heritage. The excavation of various sites in and around Vaishali has yielded many relics and artifacts. To keep safe these artifacts, Archeological Survey of India has established a museum here called Vaishali Museum. 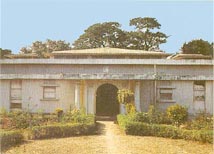 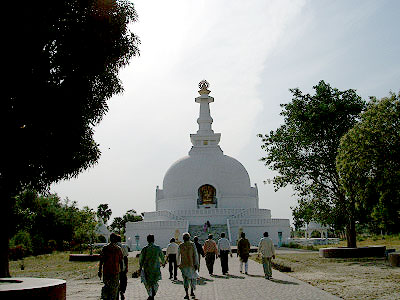 Vaishali Tourist Attractions
Vaishali was an important center of trade and commerce in ancient times. There are two stupas in Vaishali, which, according to Buddhist literature, enshrined Lord Buddha’s ashes. Like Rajgir, Vaishali too is important for Buddhism and Jainism. The 24th Tirthankara of Jainism, Lord Mahavira, was born and stayed for a considerable period of time at Vaishali. Let’s have a look at various tourist attractions of Vaishali.
Budha Stupa-I: Stupa-I is a major tourist attraction at Vaishali. Though decadence, it was once a grand structure. After excavation and corroboration it has been established that this stupa enshrined one eighth of the sacred ashes of Lord Buddha in a stone casket. 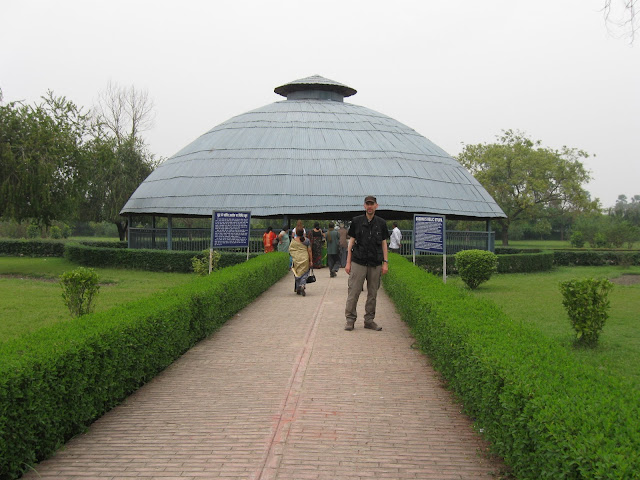 Ashokan Pillar: Ashoka the great of Maurayan dynasty was a staunch follower of Lord Buddha. To show his gratitude to Lord Buddha and Buddhism he built a Lion Pillar at Kolhua. He chose Kolhua for it was the spot where Lord Buddha gave sermon for the last time. This 18.30 meter high pillar is well polished single piece red sandstone and stands alone. On the top is capital in a bell shape accompanied by a life-size figure of a lion. 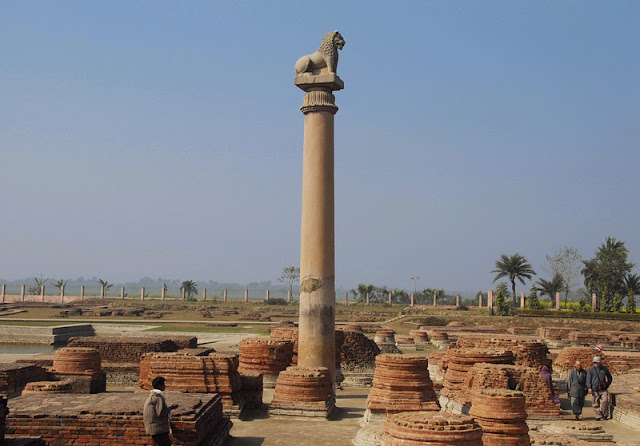 Budha Stupa-II: The numbering of these stupas has been done on the basis of their time of excavation. This stupa was excavated in the year 1958 and post-excavation archeologists found that this too enshrined a casket which contained the ashes of the Lord Buddha. Now in dilapidated form, it attracts tourists particularly Buddhists from all over the world for its historical link with Lord Buddha. 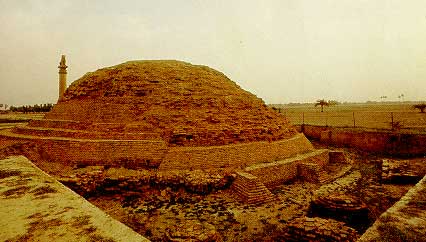 Bawan Pokhar Temple: Vaishali was not only associated with Buddhist and Jain religion but also Hinduism. The later kings of Pal dynasty built the beautiful Bawan Pokhar temple which houses numerous Hindu god and goddesses. Being located on the bank of Bawan Pond it derived its name Bawan Pokhar Temple.
Abhiskek Pushkarn: Vaishali was a democratic republic and elections were held for choosing the leadership. As the water at the pond was believed to be sacred and full of divinity, those who would get elected would come to take bath at this pond, and this ritual continued for long at Vaishali.
Kundalpur: Located four kilometers away from the center, Kundalpur was the birth place of Lord Mahavira. Lord Mahavira was the twenty fourth tirthankara of Jain religion. Being his birth place he spent a significant portion of his life at Kundalpur, which makes it an important pilgrim destination for Jain devotees. 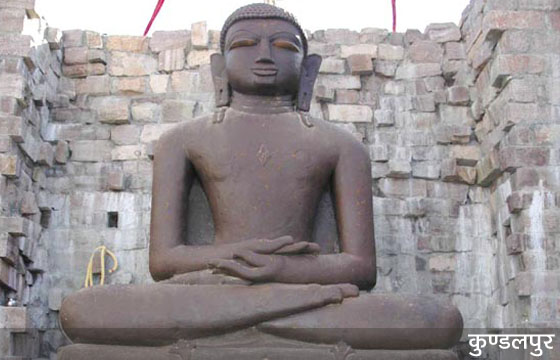 Peace Pagoda or Shanti Stupa: The peace Pagoda spread in ten acres was constructed under the wish of Fujii Guruji, a Japanese Buddhist. This 38 meter tall pagoda has a 20 meters dome and enshrines Buddhist relics inside it. Meant for world peace and harmony, the world pagoda is a major tourist attraction at Vaishali. 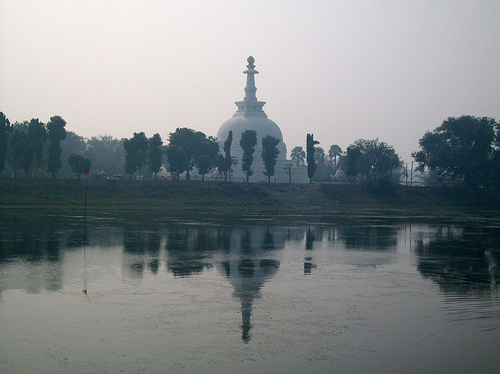 Fort of King Vishal: Though now in unidentifiable position, and in the form of a mound, the fort of mythological king Vishal is a curious attractive spot at Vaishali. Popular belief has it that the spot was the gathering center of council members of Vaishali where councilors would elect their representatives and talk policies and statecraft.
Places to see near Vaishali
PawapuriVaishali is a part of Buddhist Circuit hence all the spots near Vaishali which are related with Buddhism form part of excursion of Vaishali. Many of the places included in Buddhist Circuit are located in vicinity of Vaishali. Lets have a look at some of the important places to see near Vaishali.
Nalanda: Nalanda was the center of higher learning during ancient times. Founded in the fifth century AD, it housed more than ten thousand students and one thousand faculty members. Students from abroad came to study here. One of such students was Hiuen Tsang, a Chinese traveler, who wrote his travelogue which gives important information about the place. There were many Buddhist monasteries too at Nalanda and many were built during Mauryan king Ashoka’s time. Now in ruins, Nalanda still attracts tourists for its historical relevance.
Pawapuri: Pawapuri is located 90 kilometers away from Gaya. Jain followers believe that visiting the place one can get rid of their sins. The place is revered for being the place where Mahavir Jain took his last breath. A popular Jain tale says that when Mahavir died at Pawapuri, people took away not only the ashes but also scooped out earth which resulted into a big pond. Pawapuri has a Jain temple called Jalamandir. Jalmandir is made in marble and is a major tourist attraction at Pawapuri.
Bodh Gaya: The place where Gautam Siddhartha earned enlightenment is Bodh Gaya. Bodh Gaya is just 34 kilometers away from Rajgir. Bodh Gaya houses Bodhi Tree, Mahabodhi Temple, and other religious places relevant for Buddhists. The Bodhi Tree at Bodh Gaya is not the original tree but a sapling of old tree brought from Sri Lanka. The Mahabodhi Temple enshrines the same Bodhi Tree. Lord Buddha’s giant statue is a major attraction here at Bodh Gaya.
Gaya: Gaya is an important Hindu pilgrim destination and it is believed that “Pinda Dan” at Gaya makes one’s ancestors’ soul rest in peace. Gaya is considered the most sacred spot for Hindus.
Overview & Best Season of Vaishali
The town of Vaishali experiences a sub tropical climate, and summers in the town are very hot and winters are mild and hospitable. The best time to visit the town of Vaishali would be during the winter months, as these months experience low temperatures.
Summers in the town of Vaishali extend through the months of March, April and May, with May being the hottest month of the year. The maximum temperature during the summer months will range around forty five degrees (45°C). You can carry light cotton clothes during the summer months to Vaishali.
The monsoon season in Vaishali brings good rainfall, and rainfall normally turns heavy during the peak monsoon month of August. June, July and August are the monsoon months in Vaishali. The temperatures will be brought down by a few degrees during this time.
Winters in the town of Vaishali are during the months of October, November, December and January. These months will experience a maximum temperature of around twenty eight degrees (28°C) and a minimum temperature of around four degrees (4°C). This is a good time to visit the place. You will need to carry along light winter clothing during this time in order to keep warm at night.
How to Reach Vaishali
How to Reach VaishaliVaishali, the birth place of Lord Mahavira, was the epicenter of political and religious activities in ancient times. Vaishali, deriving its name from the mythological king Vishal of Ramayana period was the center of trade and commerce for some thousand years from the time of Gautam Buddha to Gupta period. Lord Buddha visited Vaishali quite often to deliver his sermons.
How to Reach Vaishali By Road: Vaishali is well connected by road to other important cities of Bihar. Patna, the capital city of Bihar, is 55 kilometers away and there are plenty of buses running from Patna to Vaishali. Being a popular pilgrim destination there are many tourist companies which run taxis and luxury buses.
How to Reach Vaishali By Air: Patna, at a distance of 55 kilometers, is the nearest airport from Vaishali. There are regular flights from Patna to other major cities of India like Delhi, Kolkata, Kathmandu, Varanasi and Lucknow. You can hire taxis for further movement or board buses from Patna.
How to Reach Vaishali By Rail: Most of the north India is well connected with railway network and Vaishali is no exception. Hajipur is the nearest railhead at the distance of 35 kilometers. Patna the capital of Bihar, is just 55 kilometers away from Vaishali and is well connected with all the metro cities of India and there are regular and direct trains from Patna to the cities of Mumbai, Delhi, Chennai, Bangalore, Hyderabad, and Kolkata.
Next Post Previous Post
Bihar