The city of Mumbai formerly Bombay owes its name to the stone goddess Mumbadevi, worshipped by the Kolis, who incidentally are the original inhabitants of this city. Made up of a collection of seven islands, which include Colaba, Old Woman's Island, Bombay, Mazagaon, Worli, Parel and Mahim, Mumbai is the hub of the Indian financial and corporate sectors.
Also famous as "Bollywood", it has earned itself the reputation of being the "city where dreams come true". Many youngsters from all over India and also from abroad, flock to this thriving "Mecca of Stardom" with the hopes of becoming the next big movie star. Mumbai is the hub of movie related business.
Mumbai provides the corporate visitor as well as the holidaying tourist the right ambience and all the accompanying facilities, to make a visit they will always cherish.
Tourism destinations in Mumbai
Having a good time in Mumbai or Bombay is fairly easy simply because Mumbai has a lot to offer. There is also no major hindrance to finding your way around. English is commonly used and even an average man on the street can speak and understand it well enough to guide you. Some areas that are a must to experience include:
Marine Drive:  Eulogized by Bollywood, Marine Drive caresses the seashore from Nariman Point to the foot of the Malabar Hill. Passing Chowpatty Beach, Marine Drive is also famous as the Queen's Necklace. One of the busiest roads in Mumbai, it is also one of the breeziest due to its proximity to the sea. 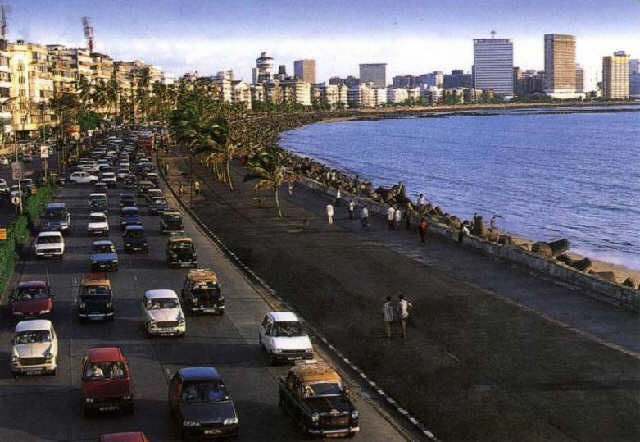 Chowpatty Beach: Come August/September, Chowpatty Beach comes alive as the devout Hindu population of Mumbai comes thronging to its sands to immerse their larger than life idols of Ganesha and incur his blessings. On every other ordinary evening Chowpatty is where the common man comes to eat and be entertained. A gastronomic paradise of bhelpuri, a savory snack made from puffed rice with loads of onions, coriander, a medley of spices topped with sweet and sour tamarind sauce, chuski ice balls dipped in syrup, pao bhaji buttered buns served with a spicy potato side dish or pungent chutney sandwiches. Chowpatty is an experience that should not be missed. 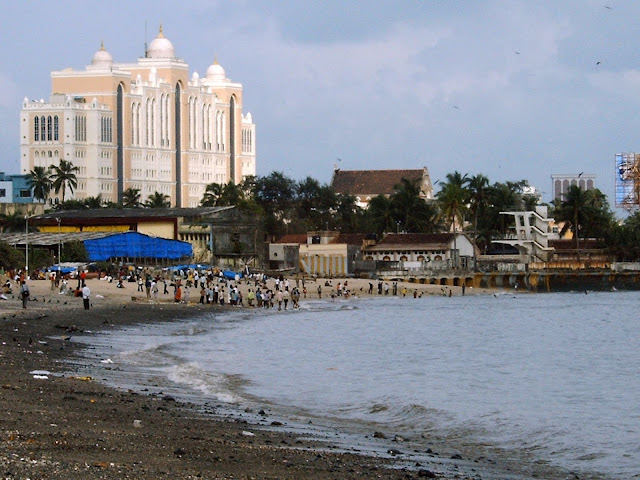 Hanging Gardens: Also known as the Ferozeshah Mehta Gardens, they are built over 3 reservoirs, which store billions of gallons of water for cleaning before they are pumped to the thirsty city of Mumbai. 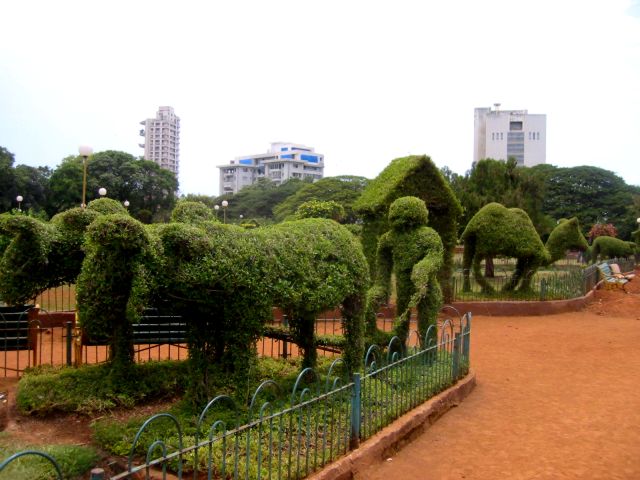 Colaba:  The hub of tourist activity in Mumbai, Colaba is known for its street stalls, cafes and kitsch ambience. Colaba is also home to the most pocket friendly guesthouses and economy hotels. 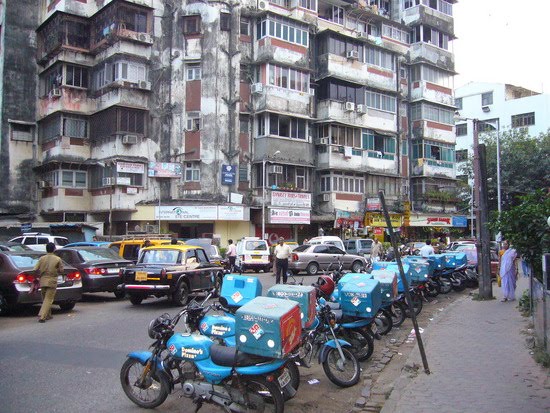 Fort: The Fort area in Mumbai is choc-a-bloc with old Victorian, Gothic buildings. An important financial and commercial center this area is always full of activity. The BSE or the Bombay Stock Exchange on Dalal Street is also located in this area. Avoid the Fort between 9.00 - 10.00 a.m. and 6.30 - 8.00 p.m. when the office traffic is at its peak. 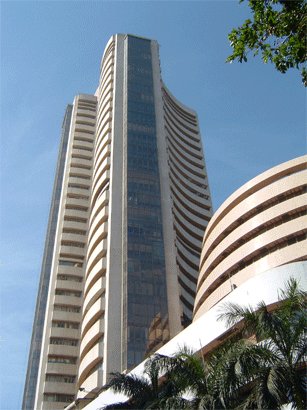 Crawford Market: With a 50 feet high sky lit awning, Crawford Market is the place to shop for a wide variety of fruit, vegetables and meat. It is famous for the frieze just above its main entry point that has been designed by Lockyard Kipling father of the famous author Rudyard Kipling. It depicts the rural Indian farmer amidst the wheat fields. The building is a blend of Flemish and Norman architecture. Named after Arthur Crawford, the first Municipal Commissioner of Bombay, the building, which was completed in 1869, was donated by Cowasji Jehangir to the city. 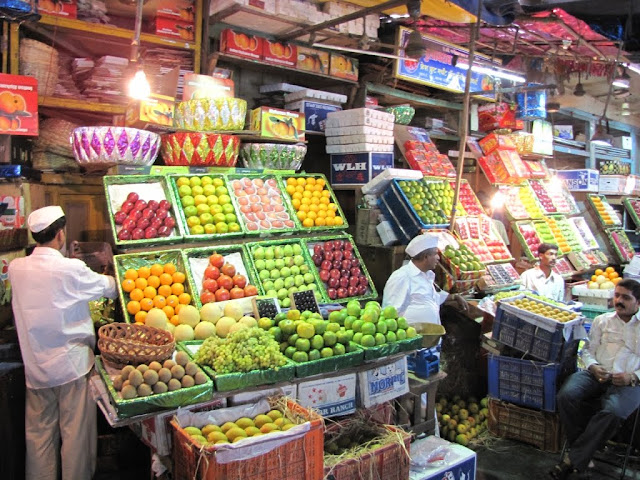 Gateway of India: The most famous landmark of Mumbai, built to commemorate the visit of King George and Queen Mary to India in 1911, the Gateway is built in the Indo-Saracenic style. Many short motorboat cruises start from the Gateway and you can enjoy the experience of Mumbai by the sea. 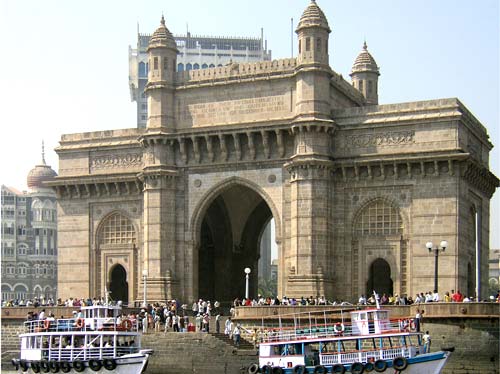 Kalbadevi:  The Kalbadevi Bazaars are what a typical Indian marketplace look like. A maze of lanes and by lanes, Kalbadevi houses numerous bazaars within it. Some of these include Zaveri Bazaar famous for its jewelers, Dhabu Street for leather, Mangaldas Market for cloth and the infamous Chor Bazaar thieves market, where you can pick up anything from electronics to cutlery. Don't forget to visit Mutton Street famous for its antiques.. authentic or not is anyone's guess. 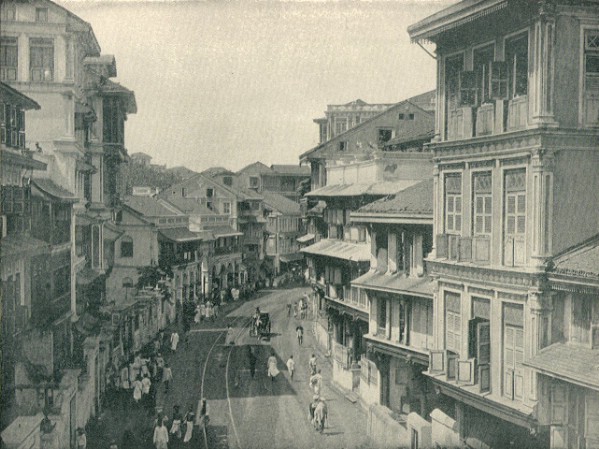 Prince of Wales Museum: Built to honor King George V's visit to India, the museum houses three main sections of Art, Archeology and Natural History. Culture buffs will enjoy a visit.
Haji Ali: A whitewashed fairytale mosque, Haji Ali is visited by people of all faiths. As the story goes Haji Ali is said to have been a successful local merchant who renounced material pleasures following a trip to Mecca. The site where he sat in meditation was made into a Mosque, which also contains his tomb. Situated at the far end of a causeway protruding into the Arabian Sea, Haji Ali can only be visited during low tide. 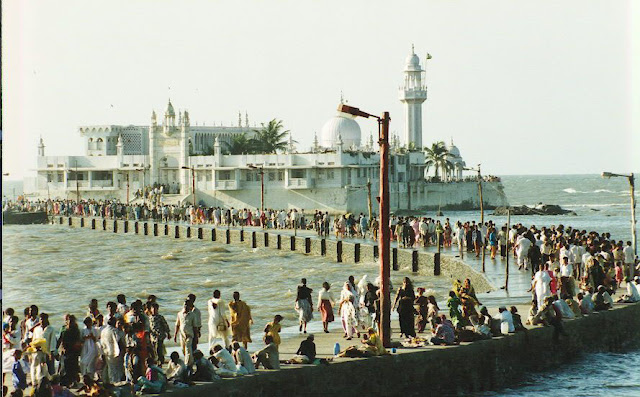 Essel World: Mumbai's famous amusement park Essel World is situated near Gorai beach and is accessible by ferry. Essel World offers you the typical amusement park attractions of roller coasters and water world, which is something tremendously enjoyable in Mumbai's high humidity. Essel World usually offers special rates during weekends and off seasons, so it would be a good idea to enquire about these before your visit. 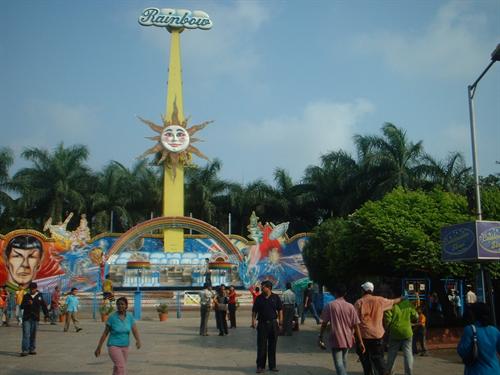 Juhu Beach: Chowpatty's uptown cousin, Juhu beach is just like the former, bursting at the seams with people out to spend an evening by the sea. If you want to escape the chaos you can watch from the safety of the various coffee shops of the various 5 star hotels that dot this area like the Sun 'n' Sand Hotel and Holiday Inn. 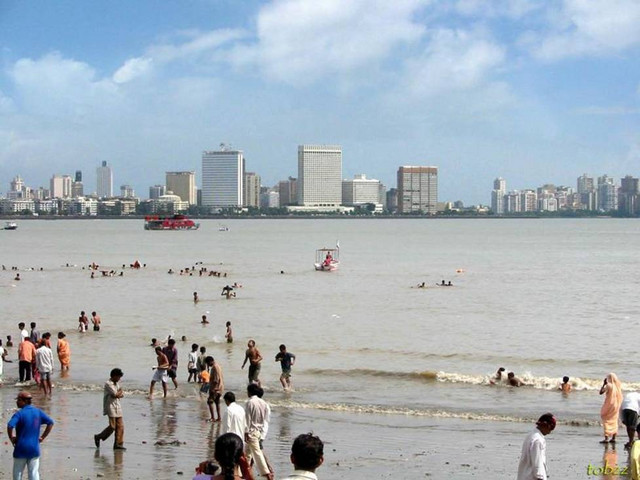 Film City: Bollywood's center of activity, Film City is located on the outskirts of the National Park. Usually visitors are not permitted but if you can pull some strings you may get to see a movie being made. 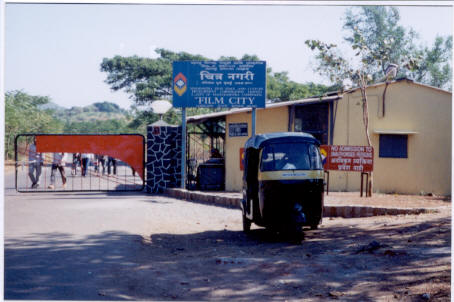 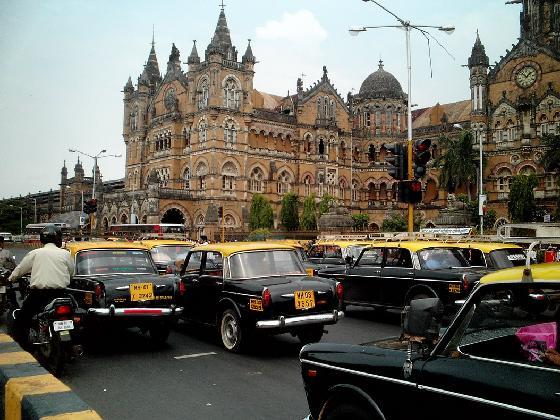 Facts and Figures
* Bombay was renamed Mumbai in 1996.
* The total area of the city is 440 sq. km or 170 sq. miles.
* The population is 18 million, projected to reach 28.5 million by 2020.
* Mumbai is the capital of the state of Maharashtra.
* Marathi, Hindi and English are the main languages.
* Telephone code is 022
* Time zone - GMT/UTC plus 5.5 hours
* Climate - Summer 200 C - 390 C, Winter 120 C - 340 C. Mumbai has a truly tropical climate and temperatures remain fairly uniform throughout the year. You never need to pack woolens for Mumbai, not even in December. Mumbai is drowned every year under torrential Indian Ocean monsoon rains between June and September, usually beginning by 7th June every year.
Best time to visit Mumbai
While planning a trip to Mumbai avoid the monsoon months of June through September, when Mumbai becomes one big, overflowing pothole.
Plan your trip between October and April when the air is pleasant and there is relatively less humidity.
If you can manage to visit Mumbai in August/September you could participate in the celebrations during Ganesh Chaturthi, which is one of the biggest festivals in Mumbai.
Celebrated to honour the elephant headed god - Ganesha, who is considered a very benign god in hindu mythology, this festival is the event to witness.
Huge processions chanting "Ganapati Bappa Moriya" carry massive idols of the divine figure to the beaches where they are submerged in the sea. This is a truly Indian cultural spectacle, which one should not miss.
How to reach Mumbai
Mumbai Bombay is a very well connected city, be it by air, road or rail.
By Air: Mumbai has more flights connecting it than even the national capital New Delhi. All major airlines fly to and from Mumbai to most of the important cities of the world. The international terminal of Mumbai is known as Sahar and the domestic terminal is known as Santa Cruz. The Sahar terminal is 30 km from downtown Mumbai and Santa Cruz is at a distance of 25kms. Besides taxis, there are regular shuttle services plying between the two terminals.
By Bus: If you would like to travel by bus within India, most long distance buses leave from the State Transport Terminal located opposite Mumbai's Central Railway Station. However, this is not a good option if you do not speak Hindi or Marathi as no printed information is available in English. However most of the neighbouring states like Goa, Gujarat, Karnataka and Madhya Pradesh have their state bus company offices located here.
By Rail: Central Railways runs services to the east and north, the Western Railways also runs trains to North India from Churchgate and Central stations. Some of the important connections by rail and their respective distances are:
Mumbai - Agra 1345 km
Mumbai - Delhi 1385 km
Mumbai - Calcutta 1960 km
Mumbai - Chennai 1280 km
Mumbai - Ahmedabad 490 km
Mumbai - Aurangabad 375 km
Mumbai - Bangalore 1210 km
Mumbai - Kochi 1840 km
Mumbai - Pune 190 km
Mumbai - Varanasi 1510 km
Next Post Previous Post
Maharashtra