Puri is one of the most captivating coastal regions of Orissa .The culture of Puri is based on traditions dating back to the third century B.C. The monuments and religious purity, way the people live with their affluent tradition make Puri the cultural center of Orissa. The state has a rich cultural heritage and has its own unique forms of dance, songs, and architecture. Puri, being an important ancient city, has been a major centre of these cultural activities for centuries.
The former rulers of this region liberally patronized the creative and artistic pursuits and thus we can see the numerous temples and ancient monuments that are dotted all over the town and endow this town a completely unique look. Puri is in-fact a conglomeration of various religions, sects and faith such as Hinduism, Islam, Sikhism, Jainism, Christianity and tribal customs. You will also come across the Hindu monuments of different sects such as Saivism, Bishnavism, Sakti cult, Ganapatya, Mohabir etc. Besides, there are a number of churches and mosques that can also be found in Puri.
The Odissi dance is an integral part of the culture of Puri and so are the lucid Odissi songs and other enchanting folk dances. Among the folk dances the most prominent ones are Gotipua dance and Naga & Medha dance. It is a tradition to express the age-old rich culture and heritage of Orissa through folk dance and song performances.
Another indispensable part of Puri’s culture is its festivals. If you are in Puri and do not witness any of the festivals of Puri, then your tour remains an incomplete one. The enthusiasm and excitement is simply unmatched in the festivals, the most important one being Rath Yatra. The festival is held in June-July each year and it is celebrated for Lord Jagannath's legendary return to his kingdom on earth. Scores of pilgrims assemble to take part in this stately event. The proceedings begin with the installation of the images of Lord Jagannath, his sister Subhadra, and brother Balabhadra in huge, lavishly adorned chariots. All the three gigantic chariots are pulled by the ardent devotees through the streets of Puri.
The Beach festival is another important festival which is celebrated in Puri. This is a good instance of the culture of Puri as it showcases Orissa's folk and classical dance forms, music and handicrafts. The time of celebration is generally at the end of the March or early April. Another festival deserving mention is the Nava Kalebara and it is the occasion for the change of external forms of three deities namely Lord Jagannath, Balabhadra and Subhadra. In this festival, new idols are carved out of sandal / neem trees, following certain rituals. The level of joy and excitement exhibited by the locals is cannot be described in words. You have to be there in person to experience the vibrancy of these festivals.
Puri Jagannath Temple 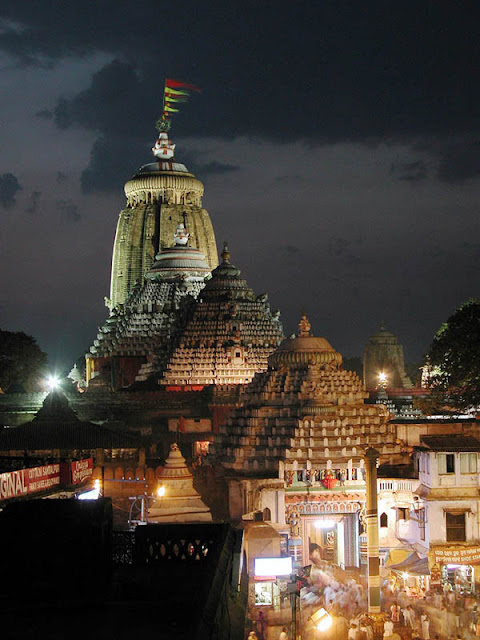 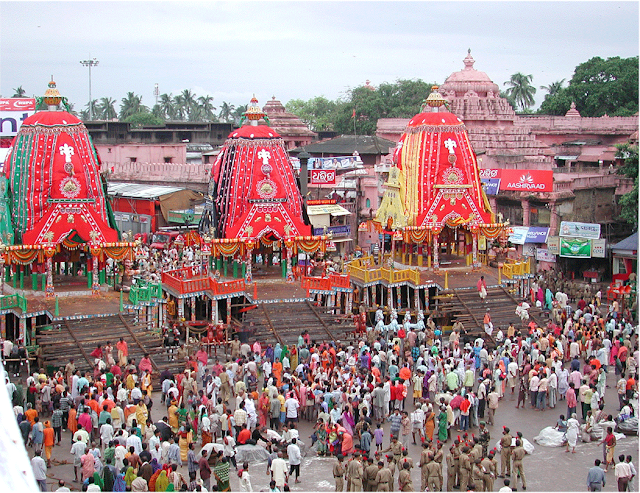 Puri Beach
Puri beach is located on the vast and exotic coastline of Orissa and at its south eastern region.
It is a wonderful holiday destination. This land of beautiful temples has been very charming to the tourists from all over the country who visit in thousands every year to Puri to take in the serene beauty of the Puri beach.
However the ideal time of visiting the Puri beach is during the Annual Puri Beach Festival that takes place in the month of November.
You will be amazed to see the beach assuming the color of festivity with wonderful arts and crafts and presentation of various dance forms upholding the culture of Orissa.
Pilgrims from all over India visit Puri to take a dip in the holy water of the rolling waves. The Puri beach is simply awesome when you take a stroll during the evening hours on the golden sand. The cool breeze together with the roaring sound of the waves is simply thrilling. Puri is also honeymoon couples' all time favourite.
There are a number of beach hotels and resorts in Puri like the Mayfair Beach Resort, the Toshali Sands Resort, Hotel Nilachal Ashok from where you can have an open view of the vast and turbulent sea. The Puri beach is perfect for beach sports where you can go for swimming with the help of guides. You can also board a boat and go for a ride in the sea.
The view of the sunrise and sunset at the horizon from the Puri beach will leave an everlasting impression in one's mind. The major tourist destinations of Puri are the famous Jagannath Temple and the chariot shaped Konark Temple.
Some Sand Arts in Puri Beach 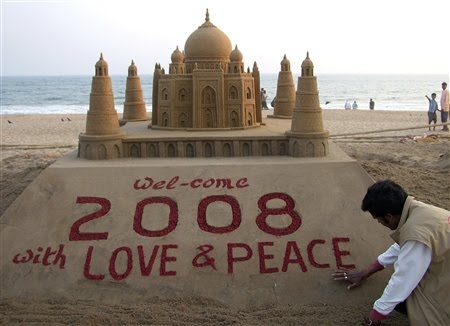 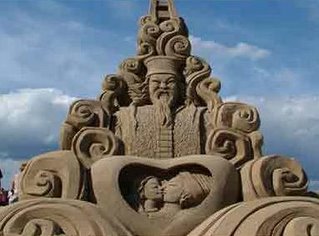 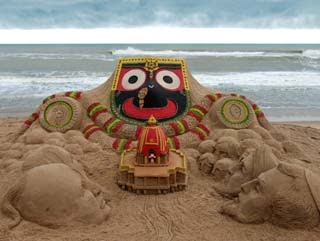 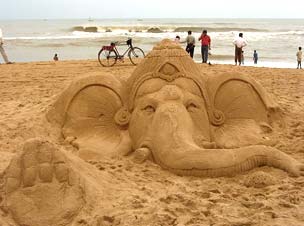 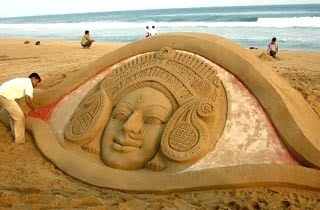 Best Time to Visit Puri
Barring the high temperatures in May and June, Puri is a year-round destination. The Puri Beach Festival in November welcomes the onset of winter, and till March and early April, Puri remains a pleasant place to visit.
How to Reach Puri
By Air: Puri does not have an airport of its own. The nearest airport is located in Bhubaneswar the capital city of Orissa. Bhubaneswar is connected by air to cities like Delhi, Kolkata, Hyderabad.
By Road: An important district in Orissa, Puri is civered by extensive network of roads. Main cities and tourist destinations, like Bhubaneswar, Konark in Orissa are connected to Puri by road.
By Rail: Puri has a Railway Station too. Many important stations link Puri to places like Kolkata, Rourkela.
Next Post Previous Post
Odisha