Agra, 204 kilometers from Delhi is one of the major cities of historical significance in India. Situated on the banks of river Yamuna, Agra is home to some finest buildings and palaces of the Mughal era. The architecture of the buildings reflects Mughal style and elegance. The architectural magnificence of the Mughals dwells in the major tourist attractions in Agra. It is home to the awe-inspiring Taj Mahal. People from far and wide throng in droves to catch a glimpse of this splendid piece of architecture.
Tourist Attractions in Agra
Agra Fort: The Agra fort another major tourist attraction in Agra was built by Akbar in 1565. Situated on the banks of River Yamuna, the Agra Fort was built of red sandstone. The structure an amalgamation of different architectural styles acted both as a Royal residence and defense establishment. 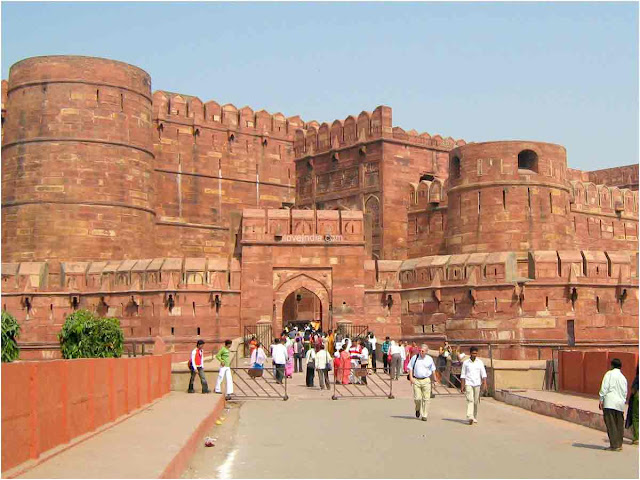 Jama Masjid Agra: The Jama Masjid was built during Akbar's reign. It is an example of austere architecture. The tomb of Sheikh Salim Chisti is found here. The Buland Darwaza is a gateway to the Jama Masjid. It is adorned in inscriptions, inlaid geometric designs and colored tiles. 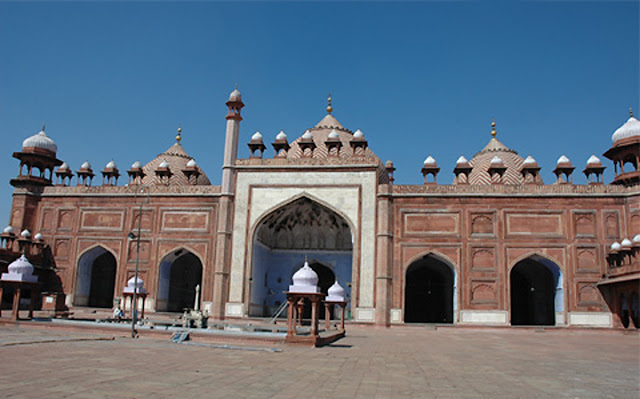 Fatehpur Sikri: The city was built by Akbar in the 16th century. It exemplifies the architectural splendor of the Mughals. 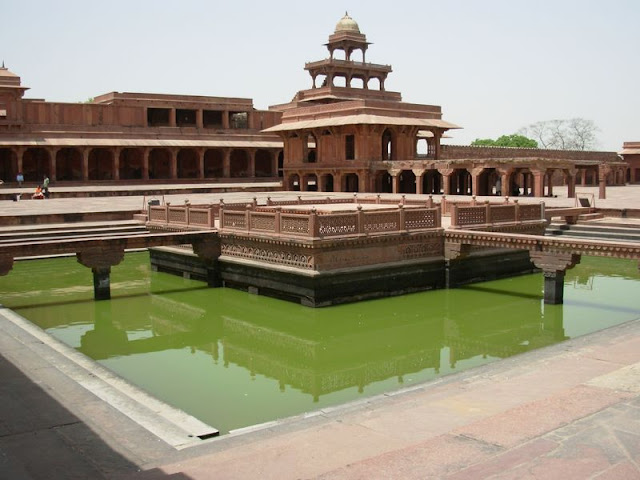 The Buland Darwaza or the high door in Fatehpur Sikri is the brilliant gateway which Akbar built as a mark of his victory against the ruler of Khandesh. The tomb of Sheikh Salim Chisti in Fatehpur Sikri is adorned in carved marble lattice.
Itmad-Ud-Daulah's Tomb: It is considered as one of the forerunners of the Taj. It is built of white marble. Inlaid semi-precious stones and intricate carvings are its main features. Most of the features of this architectural marvel are found to be replicated in the construction of the Taj. 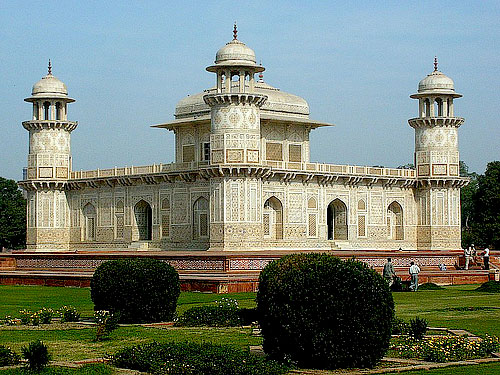 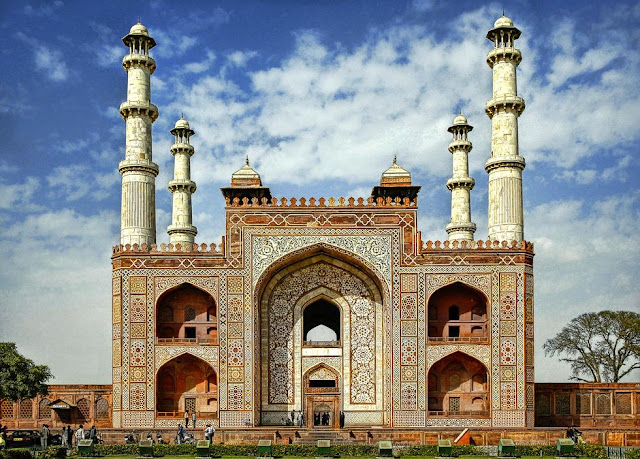 Chini Ka Rauza: This historic monument was built in 1635 and is the tomb of Allama Afzal Khan Mullah of Shiraz, a poet who was the Prime Minister of the Mughal Emperor Shah Jahan. 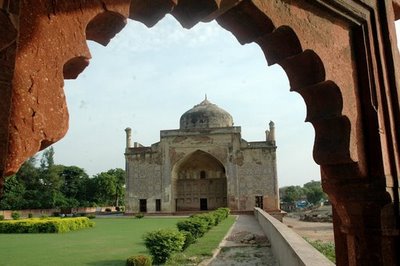 Rambagh Gardens: Inspired by the Persians love for Gardens Babur-the founder of the Mughal emperor built it as a haven of pleasure and comfort. Nur Jahan, wife of Jahangir added to the decoration of the garden. The Rambagh Gardens is also known as the Bagh-i-Gul Afshan. The main attractions of the gardens are the structure in charbagh pattern, with four main divisions made by paths and waterways. Water from the Yamuna flows in cascades. Fountains, an island platform, stairway on one side of the water channel and two pavilions on either side of the main water channel are other attractions of the Rambagh Gardens Agra. 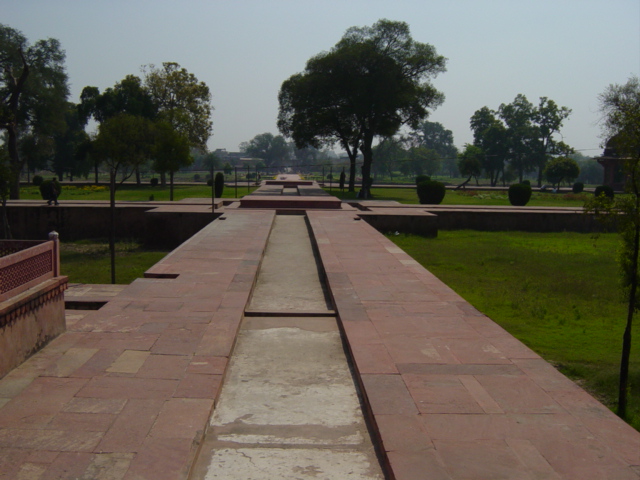 Dayalbagh Gardens: It is a pilgrimage and tourist site in India. The memorial of Shiv Dayal Sahib the founder of the Radhasoami Satsang movement, who started this religious organization in 1861, is located in Dayalbagh, Agra. The structure has fine pietra dura inlay work. The building is being refurbished every year. 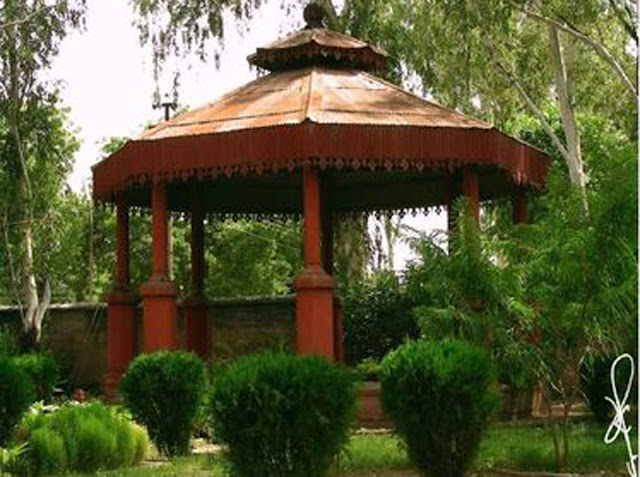 Taj Heritage Corridor: A project was proposed to build a corridor connecting the Taj and the Agra fort. The proposed Rs. 175 crore project was to link shopping plazas, tourist attractions, amusement parks and restaurants with the Taj Mahal and the Agra fort. The plan was made for the maintenance of the heritage site and its surrounding environment.
Bharatpur Bird Sanctuary (60 km from Agra)- Also known as Keoladeo Ghana National Park, is a natural habitat for water-birds like the Siberian crane. 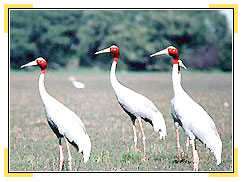 National Chambal Wildlife Sanctuary (about 70 km from Agra) - The rare species of the sanctuary is the fresh water gangetic dolphin. The park is home to crocodiles, alligators, chinkara, sambhar, nilgai, wolf and wild boar as well as other animals. 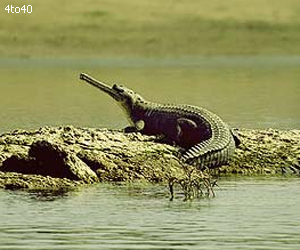 The Taj Mahal: Agra is renowned for being home to the Taj Mahal, one of the architectural wonders of the world. This brilliant piece of architecture was built by Shah Jahan as a memorial to his beloved wife Mumtaz Mahal. Shah Jahan hired architects to build the mammoth structure with an inimitable style. History has it that he chopped the hands of the hired men so that they would not produce an identical structure in future. A well laid out marble structure built on red sandstone emanating Persian, Central Asian and Islamic styles of architecture. It should be noted that the art of using marble in construction began from Shah Jahan's era. The main features of this unrivalled piece of architecture are four spectacular minarets and the majestic dome in between. The Taj a symbol of love and an example of peerless beauty has withstood the rigors of time. 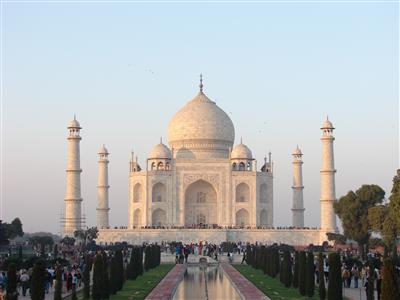 Agra - Shopping
Leather products, jewelry, rug weaving and marble work are the best buys in Agra. The Sadar Bazaar area and the area in the south of Taj Ganj, is home to several emporia and shops.
Agra - Fact File
Area: 120.57 sq. km
Altitude: 169 metres above sea level
Population: (1991) 1,259,979
Languages: Hindi and Urdu
STD Code: 0562
Climate
Agra's climate varies greatly. It is very hot in summer (April - July) and cold in winter (December - January). The average temperature can vary from 25°C to 46°C during the summer and 22°C to 5°C during the winter. The weather is humid during the monsoon season.
In summer adequate precautions need to be taken, to avoid the intense heat, such as wearing light cotton clothing, wearing a hat or sunshade while going outdoors and drinking plenty of liquids. In winter, wearing warm or woolen clothing will protect you from the cold.
Best Time to Visit
Winter is the best time to visit, when days are warm and sunny and ideal for sightseeing.
How to reach Agra
Agra, in North India, is easily accessible by air, rail and road.
Air: Agra airport is 7 km from the city center and 3 km from the main Idgah bus stand. There are daily tourist flights to Agra, Khajuraho, Varanasi and back from Delhi. The flight from Delhi to Agra only takes 40 minutes.

Rail: Agra is well connected by train to Delhi. Trains run regularly from Delhi's railway stations to Agra's main railway station, which is called Agra Cantonment station. This includes luxury trains such as the Palace on Wheels, which includes Agra in its itinerary.
Road: Agra is easily accessible by road from Delhi. The National Highway from Delhi is well maintained. The 204 km distance from Delhi to Agra is a smooth drive. Various government and private buses operate along this route, taxicabs are also easy to find. Agra's main bus terminuses are Idgah bus stand and Agra Fort bus stand.
Next Post Previous Post
Uttar Pradesh