Surat is the second largest city in Gujarat, quite famous from tourism point of view. It is located on the bank of River Tapti and was a major port in the 17th and 18th century. According to the popular belief, the city was founded by Gopi, a Nagar Brahmin, who rose to be the Prime Minister in the Sultanate of Gujarat, under Mahmud I and Muzaffar II. Apart from this, Surat also has the distinction of being the first European settlement in India. It was also host to the Dutch and the Portuguese. In the starting of the 17th century, the East India Company established its warehousing facility.
They destroyed the supremacy of the Portuguese over the port. Sir Thomas Roe went to the court of Emperor Jahangir to show his credentials as the ambassador of England. After this, the city was made the seat of presidency, under the East India Company. During the ancient era, Surat was used as the main port for the Muslim pilgrims to travel to Mecca for Haj. Today, the city is one of the prosperous cities in India. It has a flourishing Diamond industry and a major chunk of the world's diamonds are cut and polished here.
A lot of export is also done from the city. Large revenue is generated from the export done to US. Apart from this, Surat is also popular for sarees. It won't be an exaggeration to say that 1 out of every 5 sarees is manufactured here. During the festive and marriage season, people throng the city to buy sarees for the occasion. You get a wide variety at comparatively less rates. Surat is renowned for its fine silk and exquisite brocades like the Tanchoi, Gajri and Kinkhab styles, woven with gold and silver threads.
Tourist Attractions in Surat
Surat is the second largest city in Gujarat. It has contributed immensely to the growth of the country. It is famous for its diamond and textile industry. Apart from this, it also has a fairly strong historical background. It played a pivotal role in the National Freedom Struggle of India. Leaders like Gandhiji and Sardar Patel blessed the land with their venerated presence. Thus, the city has a lot to offer to the tourists. The tourists can enjoy sightseeing tours around the city and remember the glorious days of the yore.
Dutch Garden: Dutch Garden and the Dutch Cemetery are some of the famous tourist spots in the city. The architecture of the place serves as one of the major draws for the visitors. 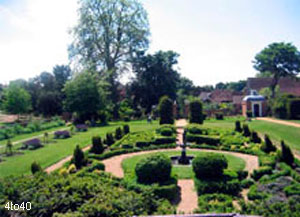 Old Fort: Old Fort in Surat was constructed by Muhammed Tughlak in the 14th century. It was built as a defense against the Bhils and is now being used as the office of the Municipal Corporation. 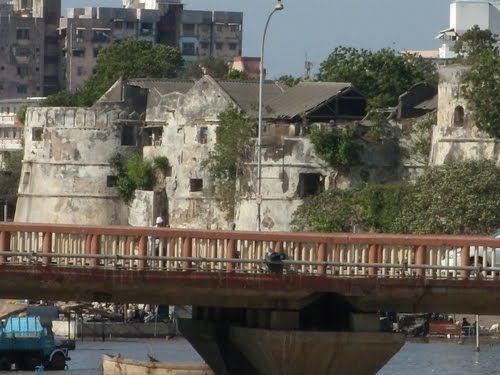 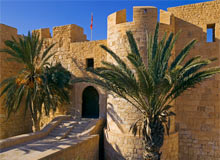 Sardar Patel Museum: Sardar Patel Museum is yet another fascinating place in the city. This museum is around 100 years old and it boasts of a collection of over 10,000 specimens of arts and crafts of the state. 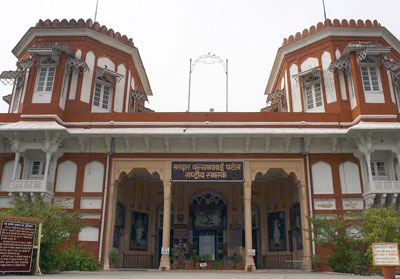 Rangupavan: Rangupavan is the biggest open air theater in the country. It has a stage of 18 meters by 10.5 meters dimensions. The theater has an astounding capacity of around 4000 spectators at a time. 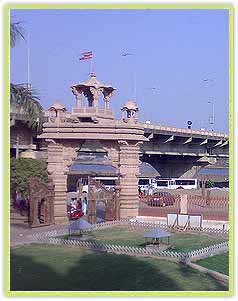 Dumas and Hajira: Dumas and Hajira are the famous health resorts near Surat. Dumas is just 16 km from the city, while Hajira lies at a distance of 28 km. They are situated on a brook of Arabian Sea blessed with natural beauty. Hajira houses two wells, containing water rich in iron and sulphur. Besides, Hajira beach, being dotted by the feathery Casuarina trees, serves as the perfect retreat from the city's hectic life. 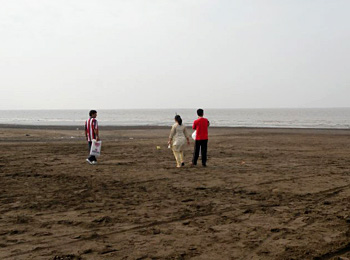 Gaurav Path: Gaurav Path is the liveliest place in Surat and is ideal place for a drive. It was constructed by the Surat Municipal Corporation. 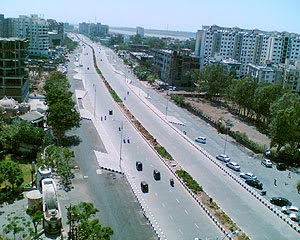 Choppati: Choppati is the favorite hangout of the people in the city. It is a lively picnic spot where people can relax in the big gardens. One can also enjoy mouth watering snacks like Paav Bhajee and Paani Puri here. 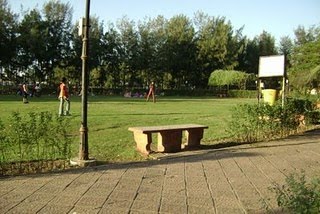 Makiapul: Makiapul is the original ancient port of Gujarat, from where the ships sailed to different parts of the country. 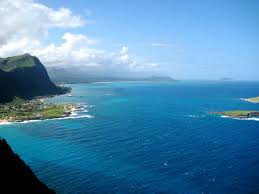 Surat Excursions
Surat has played a vital role in the National Freedom struggle of India. The city has a lot to offer to the tourists who come here. Apart from the tourist attractions, tourists can enjoy excursions from Surat to make their trip memorable. There are a number of tourist places near the city, which will remind you of the bygone era and will fill your heart with the feelings of patriotism. Gandhiji served the nation from the historical land of Gujarat. Surat is also one such place which has become venerated due to the fact that great leaders spearheaded many campaigns from here to free the country from the bondage of the foreign rule.
Dandi: Dandi is situated on the coastline near the Surat city of Gujarat. The place is associated with the famous Dandi March organized by the Father of the Nation, Mahatma Gandhi. Owing to the fact that the place was the venue for an important campaign in the National Freedom Struggle of India, it has become a major excursion from Surat.
Bardoli: Bardoli is located at a distance of 34 km from Surat and it is considered one of the major travel destinations near the city. The reason for this is that the place acquires an important place in the history of India. It is visited by followers of Gandhiji and Sardar Patel and also holds significance for the historians.

Shopping
Surat is an all time favorite shopping destination in Gujarat and is also a major trading center of Western India. In the ancient times, it was an important port with dynamic trade activities. The age old mercantile and trade still exists in the city. In Surat, there are a number of places to shop from and items to choose from. With the ebb of time, the city has progressed and become highly commercialized. Thus, it can indeed be called as a shopper's paradise. It is famous for its textiles, handlooms and handicraft industry.
It is said that one out of every five sarees is manufactured in Surat. It has a huge saree market which is an all time hit amongst women. The Zari work of the city is famous in the entire country. There are numerous shops in Surat, which specialize in the Zari work using silver and gold threads. These sarees are a must buy item for every woman's wardrobe. Apart from this, you will also find sarees adorned with works of kinari and salma. Another thing for which Surat is known is its Diamond Industry.
A major chunk of world's diamonds is cut and polished here. It even earns foreign exchange through export of diamond to US and other countries. Thus, jewelry shops are also found in abundance here. As a result, during the festive and the marriage season, the markets of Surat are flooded with people. People from across the country visit the city to buy exquisite sarees and jewelry. You can also buy items decorative items of wood, tin and ivory. Silver work is also quite popular here. You can buy regional arts and crafts from the State Emporiums.
Major Departmental Stores in Surat
Facts
Location: Bank of River Tapti
Distance: Approximately 260 km from Ahmedabad
Founded By: Gopi, a Nagar Brahmin (a legend)
Tourist Attractions: Dutch Garden, Rangupavan, Old Fort, etc
Best Time to Visit: October to March
How to Reach Surat
Surat is connected to all the major parts of India, through various means of transport - road, rail and plane. There is a good network of roads for getting to Surat from within Gujarat as well as from the different states in the country. Apart from this, you can reach the city via a number of trains. If you are still wondering how to reach Surat, another option in front of you is traveling by air. Though there are only a few flights available from here, still you can enjoy a comfortable journey. Read on to know more about reaching Surat.
By Air: Surat Airport is situated on the outskirts of the city. The airport has been inaugurated recently and has made the city all the more accessible for the tourists. Presently, there are two airlines operating from the Airport, the Indian Airlines and the Kingfisher Airlines. Surat is well connected to main cities like Delhi, Mumbai, Jaipur, Bhavnagar and Kandla by air. The airport will soon become equipped to handle international cargo and traffic also.
By Train: Surat Railway station is situated in the eastern-central part of the city. The city is a major Railway junction on the Mumbai - Delhi - Ahmedabad broad gauge line. A number of trains run to and from the station, connecting it with many important cities in Gujarat and India. It is linked to all the major cities like Delhi, Mumbai, Ahmedabad, Vadodra etc. Surat is also connected to the Central Railways through the Udhana Junction and the Tapti line. From local trains to goods trains, from passenger trains to super fast trains, all operate from the Surat Railway station.
By Road: There are a number of buses operating from Surat. Theses buses connect the city to various important states like Maharashtra, Madhya Pradesh, Delhi and Rajasthan. Apart from this, there are state buses as well as private buses connecting Surat to various cities in Gujarat. The city is connected to the National Highway via a connector highway. It is also accessible from National Highway 6, via Hazira.
Next Post Previous Post
Gujarat