Do not miss out Udaipur during your tour of Rajasthan. This beautiful city is also called the city of lakes. It is famous for a large number of magnificent palaces and a host of other tourist attractions. Tourism in Udaipur is ever growing, thanks to the presence of these tourist spots, as well as the right efforts of the authorities in promoting tourism. The tourist attractions in Udaipur include the palaces, temples, shines, museums, lakes, markets and also the sites located nearby. The tour packages of Udaipur are the best way to explore this magnificent medieval city founded in the 16th century by the Sisodia Rajputs. 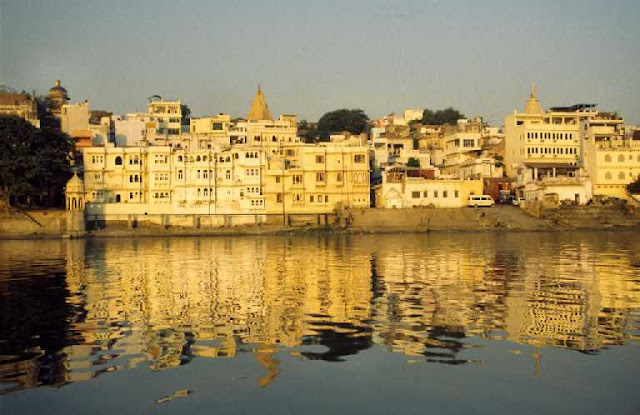 History:
The Sisodia rulers of Udaipur form the longest continuous lineage in the world, having ruled Mewar for 1200 years and 67 generations. They claim descent from the sun and call themselves Suryavanshis (descendants of Sun), and have been known to fiercely protect their pride and land. Twice, the city has seen a major battle almost wipe out their lineage. The valiant men fought till their death and the women committed the dreaded rite of Jauhar (mass immolation) on both the occasions. The Sisodias had maintained their enmity with the Mughuls and had refused to submit to them. While Babur, the founder of the Mughul dynasty had to fight Rana Sanga, Akbar had to contend with the military skills of Rana Pratap. Both the Ranas are among the most illustrious members of the Sisodia clan. Udaipur rose to prominence after the Sisodia rulers of Mewar had to shift their capital from Chittorgarh after their defeat by Mughul Emperor Akbar in 1569. After the defeat, the fort capital of Chittorgarh had to be abandoned.
The capital of the Sisodia dynasty was Chittor till the 6th century, when it was moved to Udaipur, named after Tourist attractions in Udaipur
The city has a large number of tourist attractions that includes the City palace, Jag Niwas Palace, the Jagdish mandir temple, Lake Pichola, Fateh Sagar Lake, Ahar, Shilpagram, and Saheliyon Ki Bari. The museums in the city palace, Ahar, and Bagore Ki haveli are very interesting places. Some interesting tourist spots located nearby are Eklingji, Nathdwara, Nagda and Jaisamand Lake. The vibrant bazaars of the old part of the city are major attractions of Udaipur.
Tourist attractions in Udaipur:
City Palace: Covering an area of 5 acres, the city palace is the largest palace in Rajasthan. Located on the eastern shore of Lake Pichola, it is a massive fortified structure, presenting an amazing blend of Rajasthani and Mughul architecture. The city palace in Udaipur is actually a complex of many palaces and other buildings which have been constructed over a period of 4 centuries by successive rulers. The façade of the palace resembles a fortress. The halls and courtyards of the palace’s older section are linked by narrow passages and steep staircases. The Tripolia gate and the Ganesh Deorhi gate are the major gates of the city palace. The other attractions are Chandra Mahal, Bari Mahal, Dilkhushal Mahal, and the Moti Mahal. The Shambhu Niwas palace is the residence of the present day members of the erstwhile royalty. It is a 19th century structure built along with Fateh Prakash palace and Shiv Niwas palace which have been converted into luxury hotels. 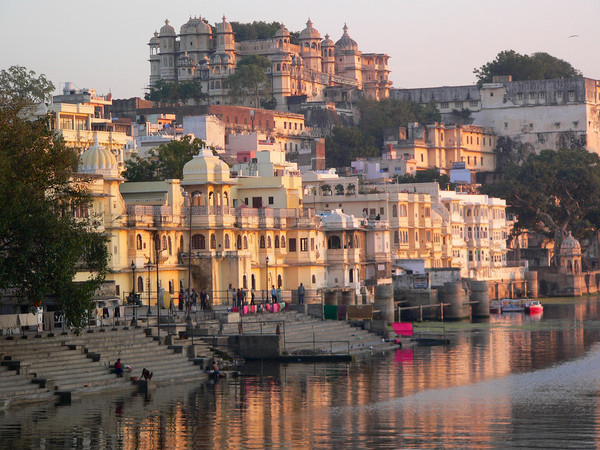 Jag mandir and Jag Niwas palace: These two palaces are located on small islands in Lake Pichola separated by a short distance. The jag mandir palace was built in 1620 and is known for its marble chambers and beautiful gardens.
The Jag Niwas palace is also called the lake palace. It is today one of the best known luxury hotels in India owned by the Taj group. It was built between 1734 and 1751. 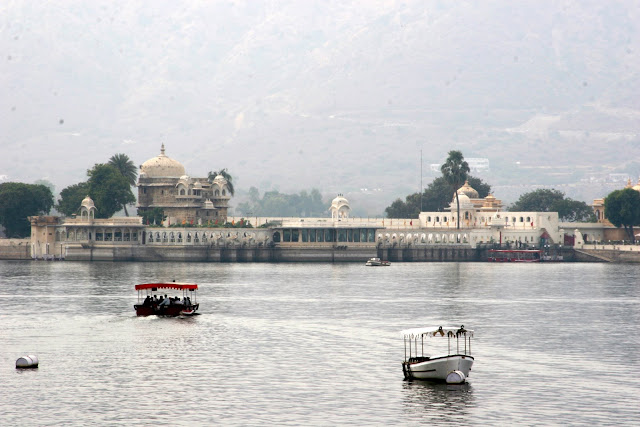 Temples:
There are many temples and religious sites in and around Udaipur. The Jagdish mandir is a 17th century temple. It is located near the main gate of the city palace and features a massive black stone image of lord Vishnu in its main shrine.
Eklingji is a complex of temples dedicated to lord Shiva. It is located at 22 kms from Udaipur and has interesting stories about the origins of Mewar rulers associated with it. The main temple dates back to the 16th century and is built of marble and granite.
Nagda is another temple site known for the 11th century Saas Bahu temples dedicated to lord Vishnu. They are known for the elaborate gateways, and sculptures depicting erotic themes and scenes from the Ramayana.
Nathdwara is one of the major religious sites of Rajasthan located 48 kilometers from Udaipur. The main deity here is lord Krishna, locally known as Srinathji. The black stone statue of this deity was brought here from Mathura for safe keeping.
Museums and other tourist attractions:
Many galleries and sections of the city palace have been brought together as part of a museum which exhibits artifacts related to the history of Mewar and its rulers. The museum at Bagore ki haveli is dedicated to the arts and crafts of Udaipur.
Ahar is located 3kms east of Udaipur and has an archaeological museum. It also has cenotaphs of 19 erstwhile rulers of Mewar.
Fateh Sagar lake, the crafts village ‘Shilpagram’, and the beautiful garden called ‘Saheliyon ki bari’ are the other tourist attractions in Udaipur. The statue of Rana Pratap riding his legendary horse Chetak should not be missed while you are in Udaipur.
Facts and Figures
Area: 37 sq kilometers
STD Code: 0294
Languages: English, Hindi, Marwari
Best time to visit: September to March
Climate :
Udaipur has a tropical climate with hot summers and chilly winters. The temperature hovers between 36-38 °C in summers but frequently go even higher. The winters see temperatures drop below 10 °C. September to march is the best period to visit Udaipur. Light colored cottons are recommended for the summers while light woolens would suffice in the winters.
Shopping in Udaipur
Udaipur is mostly known for its vibrant lakes and temples. Being a part of Rajasthan, Udaipur has the tints of bright colors and you can certainly find these colors in its lively markets. One can experience the markets of Udaipur to get the best deals and capturing the most of Rajasthan. Udaipur has myriad number of small shops, big showrooms and roadside stalls that would offer you an extensive variety to choose from.
While passing through the markets of Udaipur, you would trace many articles that can make part of your wardrobe and lifestyle too. These markets present an assortment of items covering handicrafts, pottery, jewelry, wooden toys, antique items and paintings. Udaipur is particularly famous for its miniature paintings inspired by style of Rajputs & Mughals.
Like the whole of Rajasthan, Udaipur offers the exquisite variety of handicrafts. They may range from toys, bewitching puppets, wall hangings, pen stands, cloth lanterns, handmade papers, painted wooden box to Greeting cards. Udaipur has an assortment pottery too that can be availed in both metal and mud. Pottery covers all kings of pots, plates, vessels and different kinds of containers. Apart from this, brassware and terracotta sculptures are also popular.
Regarding clothes, you can grab traditional clothes colored in batik and hand prints. Dyed saris and textile also forms the major part of clothing. Talking about jewelry, you can buy precious stones, kundan and silver jewelry to match your elegant taste of ornamentation. If you are roaming around the streets of City Palace, you will find ethnic miniature paintings that are made in the creative style of the Mewar School of Art.
By now, you must have been definitely inspired by the Mewar culture and to keep this inspiration active, you can buy the Pichwai paintings. These paintings are almost synonymous to the taste of Mewar rulers. Initially, these paintings were made in bright colors and used to make the background for images of Lord Krishna. These paintings are available on silk, wood, marble, paper and Ivory. Today, Pichwai paintings grace the drawing rooms of people with their modern touch.
Coming to the shopping places, Hathi Pol, Bada Bazaar, Chetak Circle, Bada Bazaar and Palace Road are some of the popular shopping arcades of Udaipur. While shopping in these markets, don't forget to bargain with the shopkeepers to get the value of your money. If you are running short of time to explore the markets, the Government of Rajasthan has made adequate arrangements for you.
Rajasthali and Sadhna are two government emporiums that offer all the products under a single roof. Here you will get the quality product at a fixed price. However, the real charm of shopping comes in exploring the streets of Udaipur bargaining with the local vendors. So, while touring Udaipur take out some time to shop in the vibrant markets of Udaipur.
How to reach Udaipur
How to reach Udaipur by Air : Debock Airport is 24 km from the city centre, Dairy Indian Airliness flights connect Udaipur with Jodhpur Jaipur aurangbad, Mumbai and Delhi.
How to reach Udaipur by Rail : Udaipur is directly linked by rail with major cities some important train connection are : 9643 Express (Delhi Sarai Rohilla-Jaipur-Ajmer-Chittaurgarh-Udaipur.)
How to reach Udaipur by Road : A wide network of bus service link Udaipur with several destinations. Some of the important distance are Agra 630km, Ahmedabad 262 km Jaipur 406 km .Jodhpur 275km and Mount Abu 185km.
Local Transport in Udaipur : Unmetered taxis, auto-rickshaws, tongas, city bus, regular city bus service is available for dabok airport, badi Lake, Bedala and shaeliyon ki Bari.
Next Post Previous Post
Rajasthan