Kollam is located at a distance of around 70 kilometers from the capital city of Kerala, Trivandrum. A very important port in Kerala, Kollam is known to be a renowned center of international spice trade. The famous Ashtamudi Lake occupies almost 30% of the total area of this town and is famous for its beautiful backwaters. Known as the gateway of the backwaters of Kerala, your travel to Kollam is incomplete if you miss a houseboat ride on the backwaters. It is one experience that must not be missed, come what may. So read on our related sections and know more about Kollam tourism. 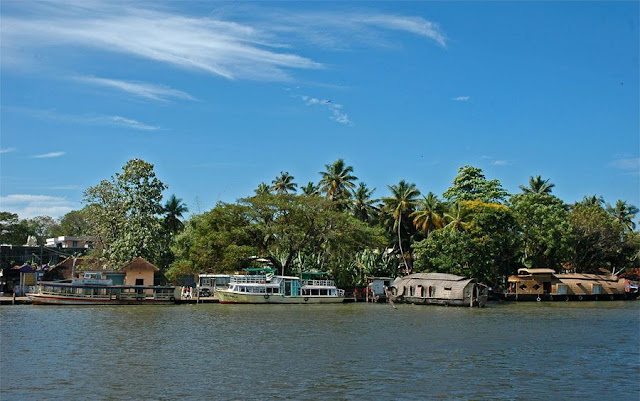 The place is historically significant and has many ruins of palaces and forts that are worth visiting. The scenic beaches of Kollam are a treat to those tired eyes and mind. But what truly makes this destination a paradise is the 900-kilometer stretch of the meandering backwaters of the Ashtamudi Lake. The place is known for its cashew industry and is an important center of trade. Though industrialized, the place hasn't lost its natural beauty and is a visual treat for anyone seeking a peaceful vacation. So come to Kollam and see for yourself the best of God's own country.
Kollam
Location: Southern Kerala, India
Climate: Tropical, Max Mean Temp: 36º C, Min Mean Temp: 22º C
STD Code: 0474
Must See: Ashtamudi Lake, Ochira, Backwaters
Languages Spoken: Malayalam, English
How to Reach: Well connected to other cities of Kerala by air, road and rail/train.
Best Time to Visit Kollam: August to March
Kollam Tourist Attractions
Kollam is a beautiful place and has many places that are worth visiting. The list of tourist attractions in Kollam is unending and you will never be left pondering with the question of what to see in Kollam. We have a compiled a list of popular tourist attractions in this section of "Kollam tours". So read on further and know more about Kollam sight seeing tours.
Kollam Backwaters: Kollam is famous for its beautiful backwaters and a boat ride through the meandering lagoons and rivers is sure to be a mind-blowing experience. 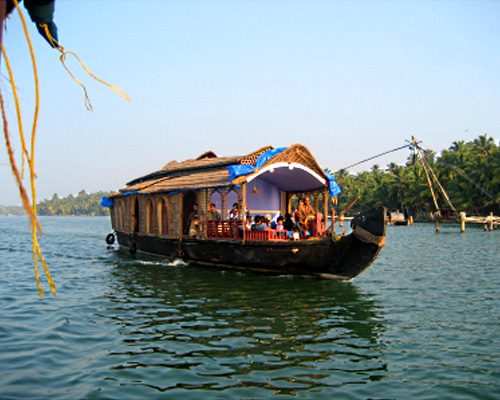 Beaches in Kollam: Thirumullavaram beach resort is the famous beach resort in Kollam. It situates 5kms west from Kollam. The sea here is ideal for swimming and bathing. Mahatma Gandhi Beach & Park and Kochupilamoodu, Paravur beach are the other important beaches. Mahatma Gandhi beach lies just 2kms from the town. It is a fascinating place for an evening. Paravur situates 13 kms south of Kollam and is connected with Kollam town by road and rail. 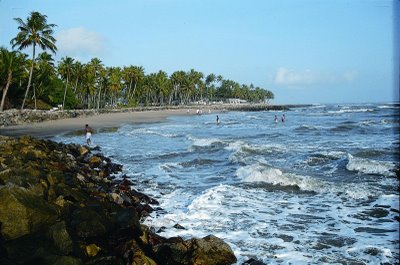 Kollam Town: Kollam Town is the head quarters of Kollam district and Kollam taluk, has a hoary past. It was an international emporium of trade and even now it is a prosperous commercial centre. It is situated about 71 kms north of Thiruvananthapuram and is linked by rail, road and backwater transport. The town edges with the famous Ashtamudi Lake. It is said that the present town of Kollam was built by the Syrian merchant ,Sapir Iso in the 9th century A.D. Kollam is also the head quarters of Kerala State Cashew Development Corporation. 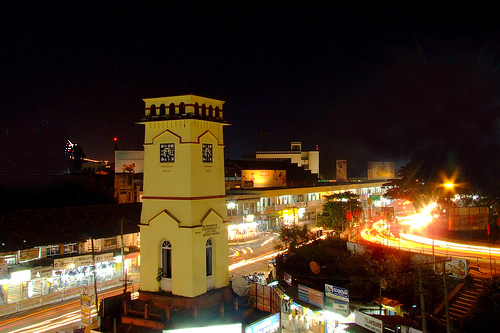 Ashramam Picnic Village: Ashramam picnic village is located in the 48acre Guest House complex. The children's traffic and entertainment park, designed by NATPAC is also located in this village. It is the largest traffic park in Kerala. The adventure park located in the village along the shores of the Ashtamudi back waters , is a novel experiment in the country. Different types of boats, including luxury cruise boats, power boats and motor boats are available on hire from the boat jetty near to the adventure Park. A budget hotel for tourists, Yathrinivas, run by Kerala Tourism Development Corporation, is also located in this village. The Govt. Guest House here is 200 years old . It stands alone Ashtamudi Lake and is a major attraction for its elegance and architectural beauty. Tourists can stay here at economical rates. The village is just 2kms away from the town. 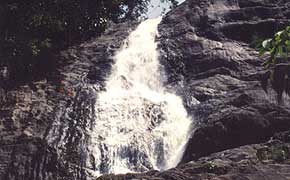 Sasthamcottah: Sasthamcottah is an attractive village situated about 19kms from Kollam town. It is a beauty spot , a health resort and a centre of pilgrimage. The extensive fresh water lake here is said to be the biggest of its kin d in Kerala. Water supply to the Kollam town is met by purifying the water from this lake. Sasthamkottah lake is called the queen of lakes.

Thangassery: Thangassery is a place of historical importance a situated 5kms away from the Kollam town. The churches here are pretty old, having been established in the 18th century. The chief attraction of the place is light house, built in 1902. The 144ft high light house stands as a sentinel, warning seamen of the treacherous reefs of Thangassery. 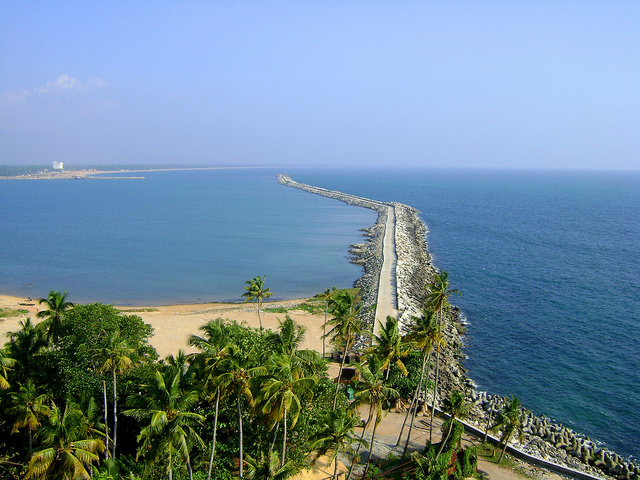 View from Thangassery light house Kollam
Thazhava: Thazhava in Oachria block is an important centre of screw-pine mat industry. An image of the Buddha, discovered from the tank known as Pallikkulam near Maruthookulangara is one of the interesting archaeological relics.
Thenmala: Thenmala is the meeting point of Kollam- Shencottah road and Thiruvananthapuram-Shencottah road, surrounded by dense forests, 66kms east of Kollam. There are a large number of rubber and tea plantations in Thenmala. Thenmala dam site is open for tourists. 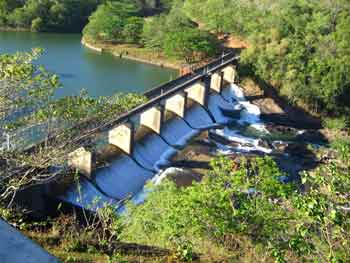 Jatayu Para: Jatayu Para, a huge rock is another attraction in Kollam district. This huge rock is in the Chadayamangalam village on the M.C. Road. The name comes from the epic , Ramayana. It is believed that Jatayu, the giant bird in the epic fell here after falling in its attempt to stop Ravana from taking Sita away. The rock is ideal for trekking by the lovers of adventure. 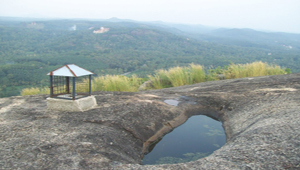 Courtalam Waterfalls: Though the famous waterfall at Courtalam is situated in Tamil Nadu, it shares the boundary of Kollam also. Season to visit the place is from June to January. 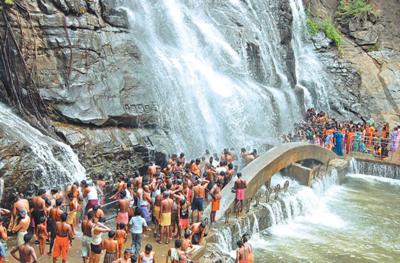 The District Tourism Promotion Council offers tourists information and assistance. The office of the council is situated at Ashramam Government Guest House complex. There are tourist information centre at the Railway station, Kollam and Kerala State Road Transport Corporation central bus station, Kollam.
Places Around Kollam
Krishnapuram Palace Museum: The Krishnapuram Palace is fully restored in March 1999, is a fine example of Keralan Architecture. The palace is well worth a visit . The palace is open 10am to 5pm every day except Monday.
Alumkadavu: Just near the Krishnapuram palace , Alumkadavu has long been a boat building centre. The traditional kettuvalams are still constructed here- no longer for rice transportation, but as luxury houseboats for tourists.
Mannarsala: 15 kms north of Krishnapuram Palace, and 32 km before Alappuzha, Mannarsala , on National Highway 47, is the site of the Nagaraja (serpent king) Temple, and the most significant site for snake worship in Kerala. According to the Mahabharatha, snakes fled from the fire started by Arjuna in the Khandava forest (believed to be an area near Alappuzha). They prayed for protection and the area around Mannarsala cooled down providing them a refuge.
Local legend relates that subsequently a Namboodiri woman developed sacred groves for the snakes and dedicated the land to the snake dieties , Nagaraja and Sarpayakshi. Today the tradition continues and the oldest female member (known as valiama) of the illam (women's section of the Namboodiri house hold), has the role of priestess and conducts rituals at the temple. On accepting the role she relinquishes her earthly marital status and assumes a spiritual one- that of wife of the serpent king deity. She lives alone in premises within the temple complex.
The temple is in typical Keralan architectural style, with the larger central shrine surrounded by many smaller ones . Infinite number of cobra idols encompass the complex, it's said that many of their earthly cousins are there as well. The two main idols are those of the serpent king and queen.
The annual festival is in the month of Thulam (October/ November). At this time the main idols are taken in procession by the priestess and offerings of milk, turmeric and rice are made.
As with Keralan temples generally, this is a peaceful place, apart from vedis (Explosive devotional sounds). Visitors who respect the rituals and the serenity of the temple are welcome. Men must remove their shirts, women must wear saris or similar clothing.
Kollam Weather
Kollam is a beautiful place of Kerala and an ideal place to visit anytime of the year. In Kollam, weather and climate is pleasant throughout the year and the vast green expanse keeps the heat in control. With pleasant weather throughout the year, this beautiful place can be visited anytime without any hassles. Read on further to know about Kollam weather forecast.
The place experiences pleasant summers and extremes in temperature are practically unheard of. The average temperature is around 25° Celsius to 32° Celsius. Summers usually begin from March and extend till May. The monsoons begin by June and end by September, cooling down the temperature. The place receives an annual average rainfall of 200 cms. The place experiences winters from December to February and temperature ranges from 18° Celsius to 25° Celsius.
How to Reach Kollam
How to Reach KollamTraveling to Kollam is quite simple and the place is well accessible from anywhere in Kerala and India. Though the place does not have its own airport, it can be easily reached from any of the three airports in Kerala.

How to Reach Kollam By Air: Located at a distance of 70 kilometers is the Trivandrum airport, which is the nearest airport from where Kollam can be reached.

How to Reach Kollam By Rail: Kollam is an important railway station and is connected to the rest of Kerala and India through a wide network of railways.

How to Reach Kollam By Road: Kollam is also connected through a well laid out network of roads making it accessible from anywhere in Kerala.
Next Post Previous Post
Kerala