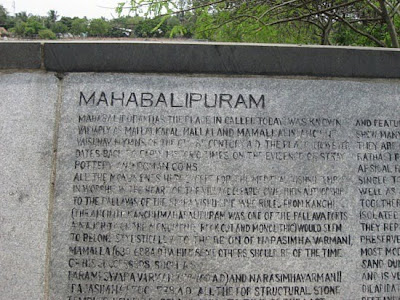 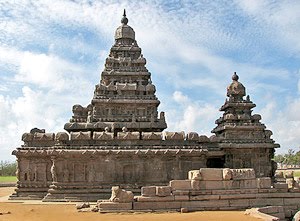 Shore Temple: This charming temple located on the shore is the most famous among the tourist attractions in Mahabalipuram. It is located between two Shiva temples and is a visual delight recognized for its architectural masterpieces. You will find the attractive sculptures of Nandi the bull while the figure of Vishnu is present in the sanctum. 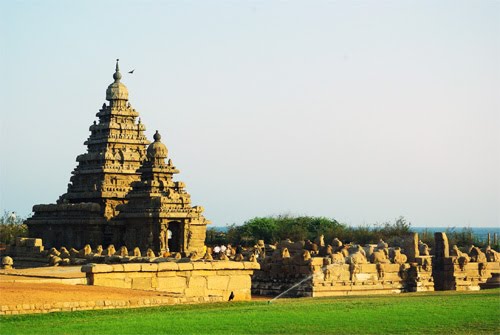 Pancha Pandava Rathas: These splendid structures dating back to the 7th century are located in the southern end of Mahabalipuram. These Rathas (chariots) are five in number and carved out of a single rock. Out of these rocks, gigantic stone animals have been carved out including an elephant. 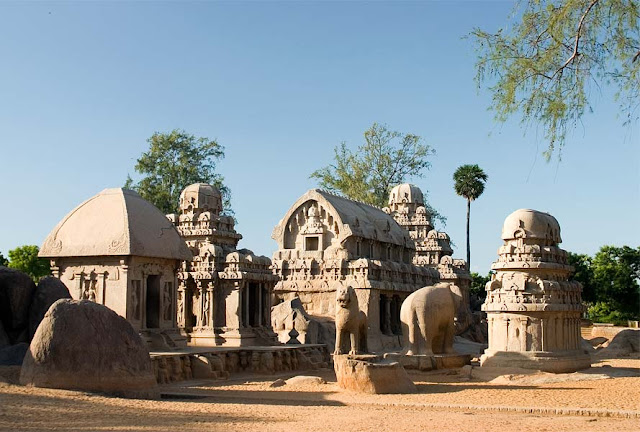 Arjuna's Penance: It is a massive bas-relief replete with meticulous carvings that include a family of elephants and monkeys. The carvings on the bas-relief are the stories from the legends of India and the Panchatantra . You will also encounter the Krishna Mandapa nearby, which is a bas-relief of enthralling architectural brilliance. 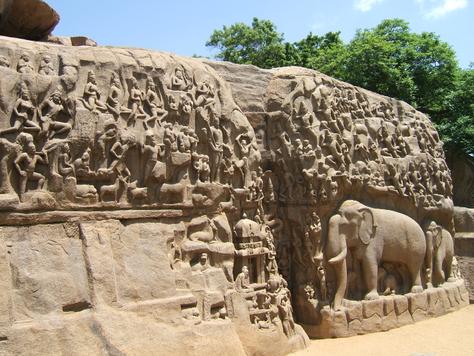 Caves: The caves in Mahabalipuram are among some of the most sought-after Mahabalipuram tourist attractions. The Varaha cave is one such cave which is actually a rock-cut mandapam (hall) and features two incarnations of Vishnu which are Varaha (boar) and Vamana (dwarf). There is also a seventh century Dharmaraja Cave and consists of three empty shrines. The other caves located here are Mahisasurmardini Cave and Tiger cave. 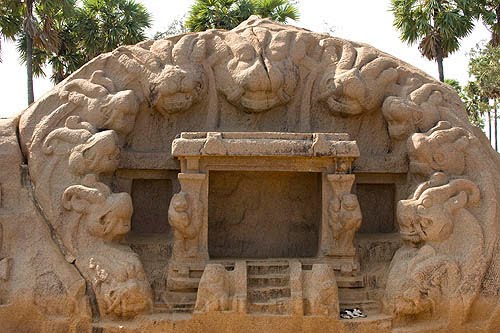 Krishna's Butterball: This is a huge natural rock perched on a hillside and the precarious way in which it is balanced simply startles its onlookers. 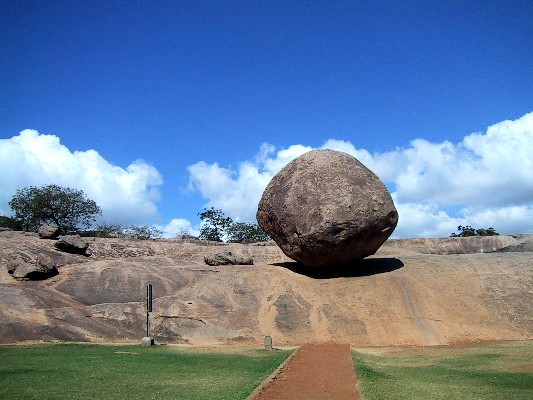 Seven Pagodas: The name “Seven Pagodas” has served as a nickname for the south Indian city of Mahabalipuram, also called Mamallapuram, since the first European explorers reached the city. The phrase “Seven Pagodas” refers to a myth that has circulated in India, Europe, and other parts of the world for over eleven centuries. Mahabalipuram’s Shore Temple, built in the 8th century CE under the reign of Narasimhavarman II, stands at the shore of the Bay of Bengal. Legend has it that six other temples once stood with it. 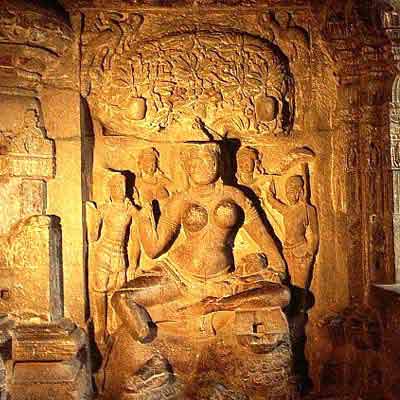 An ancient Brahman legend explains the pagodas’ origins in mythical terms. Prince Hiranyakasipu refused to worship the god Vishnu. The prince’s son, Prahlada, loved Vishnu greatly, and criticized his father’s lack of faith. Hiranyakasipu banished Prahlada, but then relented and allowed him to come home. Father and son quickly began to argue about Vishnu’s nature. When Prahlada stated that Vishnu was present everywhere, including in the walls of their home, his father kicked a pillar. Vishnu emerged from the pillar in the form of a man with a lion’s head, and killed Hiranyakasipu. Prahlada eventually became king, and had a son named Bali. Bali founded Mahabalipuram on this site.


Mahabalipuram Beach: Throbbing with live atmosphere, the Mamallapuram Beach has something for everyone. The Bay Of Bengal and the balmy breeze of the sea with sandy zones renders a combination perfect for the tourists. The rock chiseled architecture, cultural festivals hosted by Department of Tourism of the Government of Tamil Nadu and the resorts pep up your fatigue soul. Join the nature's treat and catch her live at Mahabalipuram Beach. 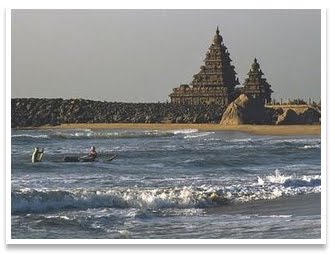 Covelong Beach: Covelong is a small fishing village. It is about 40 km from Chennai towards Mamallapuram. Here, once there was a port which now has been changed to a luxury beach resort. Visitors can go for wind surfing and swimming in this resort. 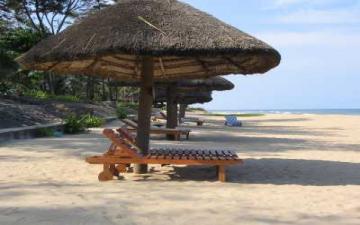 Muttukadu Boat House: The visitors who flock in to this Muttukadu Boat House enjoy the wind surfing, canor, karfak, pedal Boat, Row Boat and Other facilities and entertainments available. It is 80 kms away from Kanchipuram. This wonderful picnic spot in Muttukadu is developed by the TTDC. This is a very good spot to relax and enjoy for a day. 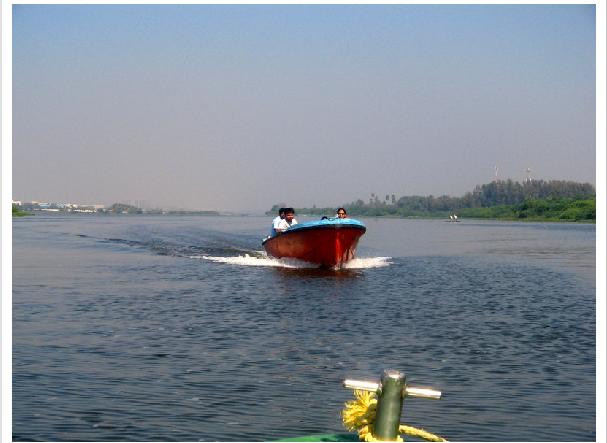 Moreover, Mahabalipuram is also an ideal point for indulging in various adventure activities such as bike trips, boat rides, fishing trips, trekking and wind surfing.
Best Season, Climate and Clothing
Mahabalipuram experiences a hot and sweltering climate all year round with a maximum temperature of 35°C and minimum temperature of 19°C. A trip to Mahabalipuram can best be enjoyed from October to March; however the monsoons should be avoided.
Mahabalipuram is not just about the temples and architecture but it is also about the natural beauty of the surroundings. The long stretch of the beaches dotted with palm-groves is ideal to spend a few moments away from the usual cacophony of the city. A visit to this place is also an educative experience, showing visitors the great architectural achievements of the ancient artisans of India.

How to reach Mahabalipuram

By Air: Chennai is the nearest airport, 58 km away and has an international and domestic terminal. Chennai is connected with all the major cities in India through direct flights.


By Rail: The nearest railway stations are Chenglapattu, 29 km away and Chennai, 58 km away which has a good rail network connecting all major rail junctions in India.


By Road: Mahabalipuram is connected by road to Chennai, Chegalapattu, Pondicherry, Kanchipuram and other important cities in Tamil Nadu.You can even hire a taxi to Mahabalipuram from Chennai.
Next Post Previous Post
Tamil Nadu