Annavaram is in the Chennai to Howrah main railway line. Annavaram is situated 32 Km from Pithapuram, 51 Km from Kakinada and 72 Km from Rajahmundry.It is famous for Lord Veera Venkata Satya Narayana Swamy temple, situated atop the Ratnagiri Hills on the banks of the river Pampa. 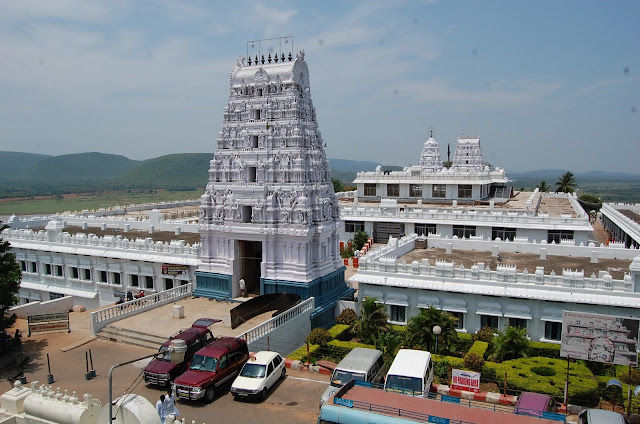 One of the most popular temples in Andhra Pradesh, a unique Yanthra based on Tripad Vibhuti Narayan Upanishad exists here. The shrine is constructed in two storey, the lower one containing the Yantra and upper one housing vigrahas of the Lord.The idol which is about 4 metres high is in cylindrical form.The base in the lower sanctum represents Lord Vishnu and the middle portion represents Lord Shiva. The image of the deity forming a single idol and representing the Hindu Trinity is of unique attraction. 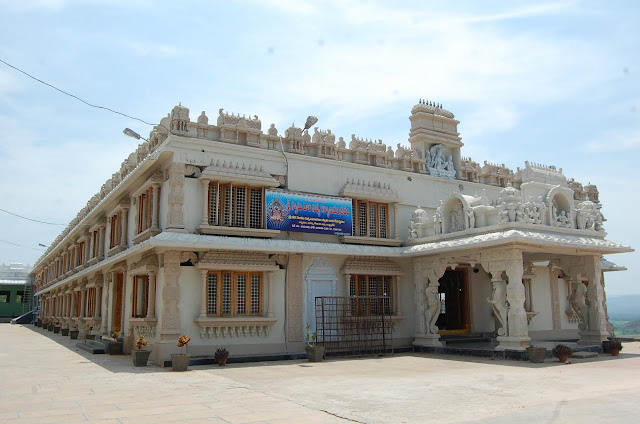 In this temple premises, there is a sun dial which shows the Indian Standard Time.The Kalyana Mahotsavam of the deity during May attracts thousands of pilgrims from all parts of the State.
Temple History
As per the puranas the presiding deity of the place blesses the devotees with Anina Varam (Wanted Boon) the place is called Annavaram.

The hillock by the side of the village is considered to be very sacred. Meruvu the Lord of the hills and his consort Menaka did great penance and begot two sons by the grace of Lord Vishnu. One was named Bhadra and the other Ratnakara. Bhadra pleased Lord Vishnu with his devotion and penance and with his grace became Bhadrachalam on which Lord Sri Rama had permanently settled. Ratnakara desired to emulate his brother and succeeded in pleasing Lord Vishnu by his penance to settle on him as Veera Venkata Satyanarayana Swamy, Ratnakara remaining as Ratnagiri hill. 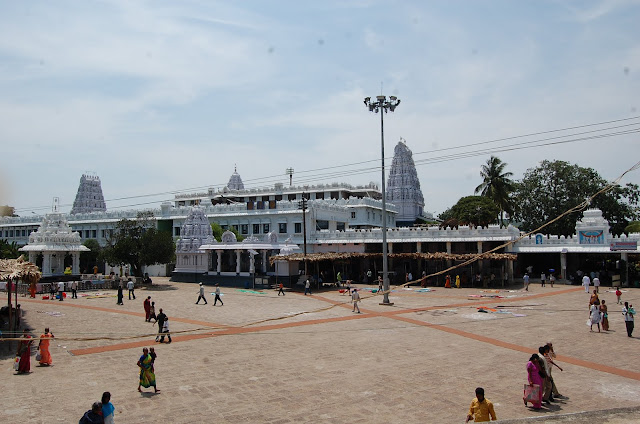 The temple of Sri Veera Venkata Satyanarayana Swamy is the main temple on the Ratnagiri hill. There is also a temple of Sri Rama and the shrines of Vanadurga and Kanaka Durga nearby. The temple of gramadevatha (village deity) is in the village at the foot of the hill.

It is said that Raja I.V.Ramanarayanam,the then zamindar of Gorsa and Kirlampudi estates, having been ordained by the Lord in his dream, traced the idol on the hill, worshipped it and installed it at the present spot on sravana suddha vidhiya of the telugu year Khara, 1891. The hillock it self is about 300ft above sea level, green fields all-round the hills and the pampa river encircling Ratnagiri. About 460 well laid stone steps leads to the top of it. 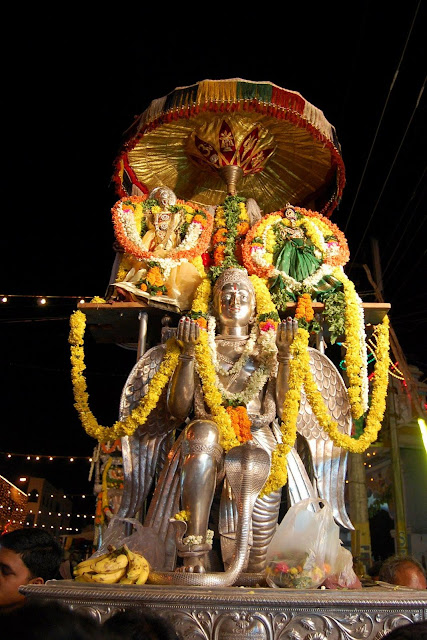 “The main temple constructed in the form of a chariot with the four wheels at each of the four corners. In front of the main temple is the kalyana mantapa, constructed and decorated with modern pieces of architecture. As we go down the way, we come across Ramalaya and then the shrines of Vana Durga and Kanaka Durga.
The Akriti of any temple is, according to the Agni Purana, merely a manifestation of the Prakriti. According to this the chariot of the temple is intended as a symbol of the Seven Lokas and the seven Lokhas above with, the garbhalaya of the Lord, at the heart’s center ruling over the entire Universe.

The temple at Annavaram has been constructed to depict this idea concretely. The front side of the temple depicts the chariot. The Meru on the floor with the pillar at the center, and the idols at the top are intended to bring forth the idea that the Lord not only remains at the heart’s center but also permeates the entire universe. The wheels depicting the Sun and the Moon serve to remind us that this Juggernaut moves on the wheels of time, and goes on for ever and ever, Thus the Annavaram temple satisfies both the ritualistic values and the spiritual aspirations of the devotees.”

Devastanam Cottages are available on the hills.

How to Reach the Temple
Sri Veera Venkata Satyanarayana Swamyvari Devasthanam, Annavaram is well connected by both Rail and Roadways. It is Situated at a distance of 3KM from A.V.M Railway Station, the Vijayawada –Visakhapatanam Line of the Southern Railway. Madras to Calcutta, NH-5 Road is going via Annavaram. Regular Bus service is available from all near by towns.
By Road
By Train
By AIR