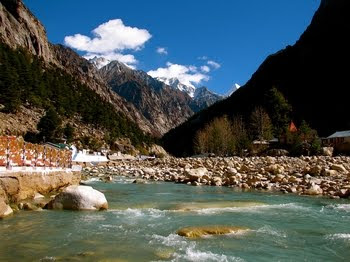 Gangotri town is situated in Uttarkashi district of Uttarakhand. It is a pilgrim town which is located on the banks of river Bhagirathi. It is located on the Greater Himalayan Range, and is at a height of 3,042 metres. Gangotri, which is the origin of the sacred river Ganga, attracts tourists from all over the country, every year. It is one of the four sites in the Char Dham pilgrimage centres.

It was Amar Singh Thapa who created the temple in the early 18th century AD. The Gangotri temple is a day's worth of travel from Rishikesh, Haridwar or Dehradun or a couple of day's travel, if one is traveling from Yamunotri. It is also believed to be the place where Goddess Ganga herself presides. Gangotri is also the source of the river Ganga. The river is called Bhagirathi at the source and then it takes on the name Ganga, from Devprayag and ultimately it meets Alaknanda. Gaumukh is the origin of the river, and is a 19 kms. trek from Gangotri.

According to a legend, Lord Shiva rewarded King Bhagirath after his remorse and that is when Ganga came down on earth. But because of her pride as well as of the fact that the earth would be destroyed if Ganga came down in her full force, Shiva got hold of her in his hair. Subsequently, it is said that Goddess Uma or Parvati would bathe in the Ganga daily and after that only she descended on the earth. Because of this reason, Ganga is also known as Bhagirathi

There are a couple of major attractions for tourists that keep them coming back year after year. The major tourist attractions of Gangotri are the following:

Submerged Shivling: The Shivling which is submerged in river water is a magnificent sight which reinforces the power of the divine God. Mythology has it that Lord Shiva sat at this spot to receive Ganga in his locks.

The submerged shivling is visible in the early winters when the water level goes down. The submerged Shivling is perhaps the most sacred spot where Ganga, the stream of life touched mother earth for the very first time. 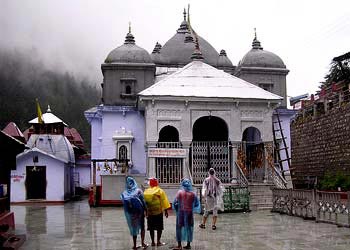 Gangotri Shrine: Right by the side of the bank of Bhagirathi River stands the shrine of Gangotri. It is dedicated to the Goddess Ganga. Located at a height of 3,042 metres above the sea level, it is believed to have been constructed in the early 18th century by a Gorkha Commander named Amar Singh Thapa.

Each year, the temple sees lakhs of tourists visiting between the months of May and October. However, by November, Gangotri is covered in snow. There is the Gangotri temple located near-by the shrine. The temple is 20 feet in height and is made of exquisite white granite. 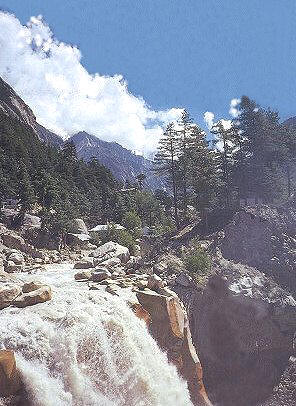 Places to See Near Gangotri

Nandanvan Tapovan: A tough trek alongside the Gangotri glacier takes one to the beautiful Nandanvan. It is also the base camp for the Bhagirathi peaks, and offers an excellent view of the surrounding Shivalik Peak. It also leads to Tapovan which is known for the beautiful meadows that surrounds the base of the Shivalik Peaks. 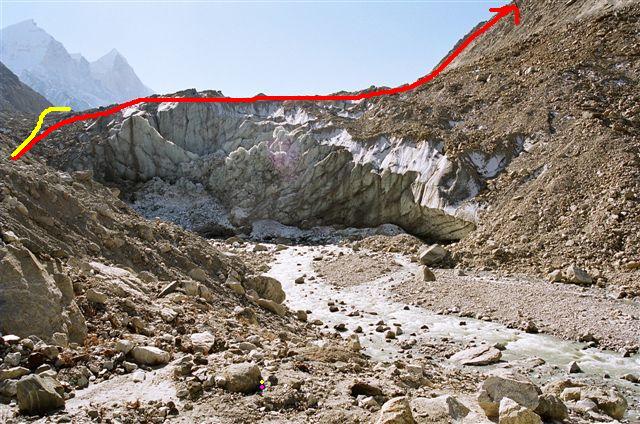 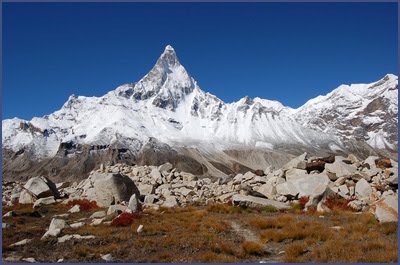 Uttarkashi: Uttarkashi is a very important pilgrimage centre, and is located at an altitude of 1,150 metres above sea level. It is situated on the bank of river Bhagirathi. A few of the very important temples located here are, the Vishwanath temple, Ekadash Rudra temple, Gyaneshwar temple and Kuteti Devi temple. The Nehru Institute of Mountaineering is also located close-by. Every year people visit Uttarkashi to take a holy dip in the Bhagirathi River. 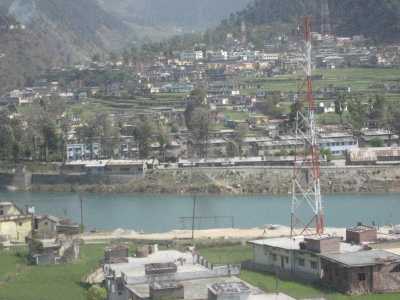 Kedar Tal: Kedar Tal is a beautiful lake that is located at 4,425 metres above sea level. The magnificient Thalaiyasagar peak is the backdrop of the lake. It is accessible through a mountain trek, and it also acts as the base for trekking into the surrounding areas. However, do remember that the trek to Kedar Tal needs a local guide. 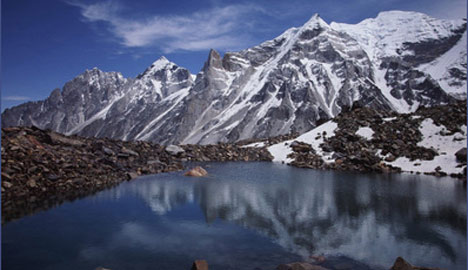 Gaumukh: Gaumukh is the source of the Bhagirathi River. Pilgrims trek up on foot all the way to take a holy dip in the ice cold water. Ponnies are also available for the trekking as well. 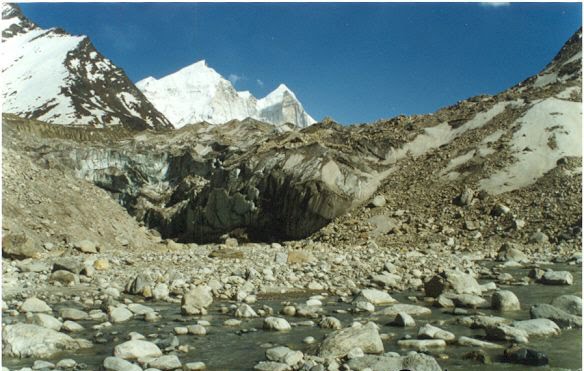 Dayara Bugyal: Located at a height of 3,048 metres above sea level, Dayara Bugyal is a beautiful meadow. A road connects Bhatwari with Raithal village. From this village, Dayara Bugyal is about a 6 km. long trek. The Sheshnag temple, located here is also a major attraction. It falls enroute to Dayara. From Dayara, one can trek down towards Dodi Tal as well. Ski slopes are provided at an area of 28 sq.kms. during the winters at Dayara Bugyal.

Nachiketa Tal: A beautiful trek through some of the lush green forests leads one to the Nachiketa Tal. The main attractions of the place are the beautiful surroundings and the small temple lake. 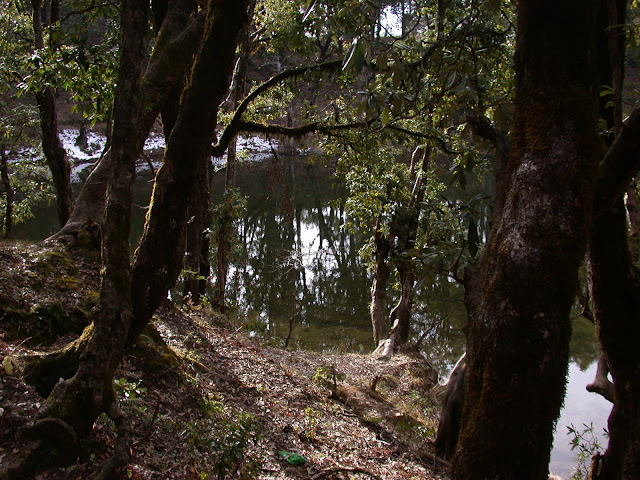 Tehri: The former capital of Tehri Garhwal Principality is also a major attraction for the tourists. Tehri is also the site of a giant hydel project - the Tehri Project. 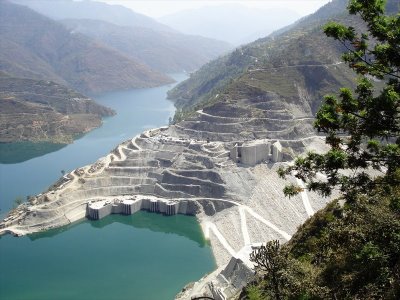 Narendranagar: The present capital of the Tehri state, Narendranagar offers some of the most pleasant view of the Ganga valley of Rishikesh and even the plains of Haridwar. 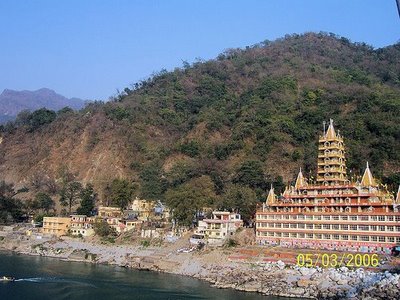 Gangotri is located at an altitude of 3,042 metres and hence the temperature can be quite chilly during the winters. Gangotri is closed from November to around April/May due to heavy snowfall in the area.

The average maximum temperature of Gangotri is about 10 to 15 degrees Celsius while the average minimum temperature easily goes below the zero degree mark. The monsoon season in Gangotri starts in late June and stays till August, during which Gangotri receives quite a lot of rainfall.

During the winter season, the place is full of snow and the temperature touches zero degree quite easily. Warm and woolen clothes are a necessity almost all round the year, in Gangotri.

How to Reach Gangotri

Gangotri is a very important religious and holy place, located in Uttarakhand. It is very well connected through road with most of the major cities. The National Highway (NH 58) from Delhi to Mana is accessible throughout the year. Reaching Gangotri is not a tough task. Read on to find out how to reach Gangotri.

By Air: The nearest airport from Gangotri is Jolly Grant, which is located just 26 km from Rishikesh. From the airport, the travelers need to take either a taxi or the luxury buses to reach Gangotri.

By Rail: The nearest railway station is located at Rishikesh, about 249 kms away, from where one has to hire a cab or take a luxury bus to reach Gangotri.

By Road: Gangotri is well connected by road to Uttarkashi, Tehri Garhwal and Rishikesh and to other parts of the country as well. Some important road distances from Gangotri are:
Uttarkashi 97 km
Tehri 167 km
Dharasu 125 km
Yamunotri 232 km
Mussoorie 250 km

There are bus services of Samyukt Rotaion Yatayat Vyawastha Samiti available as well, that connects Gangotri with many major centres in the region like Haridwar, Rishikesh, Tehri, Uttarkashi etc.